Seneca and Kant; or, An exposition of stoic and rationalistic ethics, with a comparison and criticism of the two systems 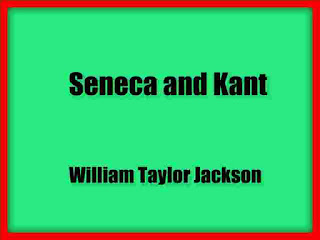 The present work might perhaps be more properly entitled " The metaphysic of spiritual Idealism," only that, far from being inconsistent with common-sense dualism, it takes note of the sensible conditions of consciousness, as well as of consciousness itself. Professor Ladd says, "Psychology treats of the relations of feelings and thoughts to things and to the brain; but psycho-physical parallelism is so suffused with metaphysics, that a science of consciousness — i.e., a psychological science — without metaphysic is impossible," and therefore absurd.
The emotions of the unalterable spiritual substance of humanity and the fundamental ideas of reason refer to entities or verce causm, not to the conditions of perception, apprehension, and comprehension, our mental representations being of the phenomenal modifications of the abiding attributes or aspects of noumenal Being, i.e., power, wisdom, and goodness.
The word sensation indicates a special molecular state of our brain; a determinate group of physicochemical phenomena affected in the cells or fibres of our cerebral substance, corresponding to each state of our consciousness.
The psychologist confines himself to a statement of the modus operandi of the mind, but this itself is only reflectively realized by the human spirit": consequently, as the majority do not employ the faculty of reflection, they are not self-conscious, and accordingly, have as little real knowledge of themselves as of other people, and Being, without true self-respect, vi Preface respect for others, or for Personality, as such, is inconceivable to them.
The difficulty of completely grasping or apprehending the moral Ideal arises from individual physiological idiosyncrasies; hence it takes a different complexion for each of us, and "no man's moral task is exactly like his brother's," that task being out of inner nature and outward circumstances to fashion a character true to the abstract reflective Ideal of humanity, not letting animality, or the pride of this life, get the better of our higher and characteristic nature.
Aristotle describes man as "a thinking animal," all our rational generalizations being from introspectively realized personal experiences. Theology is like all science, reflectively arrived at. Dogmatic religion and philosophy agree in the predicate that by faith, love, and hope in noumenal, i.e., spiritual.
Being, and above all in the Supreme Being, man is saved from doubt, malignity, and despair, which are the negations of faith, love, and hope. It is only through the laws of thought, or principles of reason, that we discern the order of evolution that prevails throughout the world, else all external nature would appear to us as confusion worse confounded.
The correlativity of human spirits to each other, which are compounded of opposite idiosyncrasies, is as chemistry to mechanics, i.e., a finer, closer form of attraction than that which is presented by mere sexual correlativity. Man and woman are the two terms supporting the cor-related elements of thought or mental representation.
As in a single ray of light, all the colours of the spectrum are present, so a complementarily balance, though finite, personality sees Being and life as a whole; whereas the individual has taken alone is handicapped by his inherited, and accidentally determined, idiosyncrasy. Thought is the type of relativity; each of its components factors is related the one to the other so strictly that the mental representation of them is synchronous.
Although reflective analysis can separately consider them, it cannot decompose their relations to each other, but only observe the variety of proportions in which their synthesis takes place in each particular personal idiosyncrasy. An inherited physical organism, or a hereditary tendency in a given nervous system, determines the lines of least resistance in thought and action in different individuals at different epochs, and in different parts of the globe.
The same elements are held together in such different modes, that only by holding things, or objects of thought, together can we understand their relation to each other. T
he Tirhbuctoo nigger and the Greenlander would not seem, at first sight, to be of the same species as the Louis Quatorze beau, or Shakspeare's fop, or as the great philosophers and poets of Greece, Germany, England, and France; yet the triple unity of consciousness (feeling, in- intelligence, and will) holds alike in cultured and uncultured, as does also the synthetic unity of the Ego, reflectively considered.
Although the savage may not be exacting as to the adequacy or sufficiency of a cause for a given effect produced upon him, or regarding the true relativity of efficient causation to the nature of the subject of the effect, or as to what is the final cause or purport of all rational activity, i.e., action for the conservation of the integrity of Being; yet he none the less assumes causality as a law of thought or mental representation.
And, although the uncultured man may be absolutely ignorant of what really constitutes the Good or Best for Being, lie still seeks for it as we do, the manner of the search being determined by the law of evolution; he, therefore, is not a contradiction of the fundamental ideality of Being.
Hence there is no absurdity in supposing, as Mr Balfour viii Preface says in his Defence of Philosophic Doubt, "that a moralist may, in the course of speculations, hit on some entirely new First Principle, which he has not held even obscurely before, but which commends itself to his mind as soon as it is presented to him."
the book details : Download 1.5 MB