Self-control and how to secure it 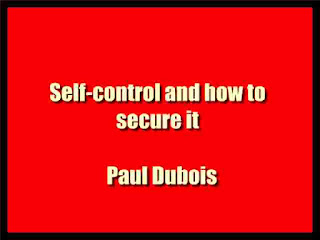 From Preface:
"Man is the only animal who does not know how to live," I said one day after listening to the grievances of my patients. It was not their suffering that called forth this irreverent dictum —irony would have been hateful — it was the frequent assurance that they were the authors of their own misfortunes, and not always they alone, but their relatives and their fellow men.
Far be it from me to reproach those who suffer; by what right shall we judge others? But, on examining the circumstances sur- rounding these unfortunates, I have often said to myself: "All this need not have been and should no longer be possible,"
A colleague to whom I submitted these reflections — commonplace by reason of being old and true — subscribed to my opinion, but immediately hinted that my ideas applied only to those nervous patients who since the discovery of neurasthenia crowd the physician's office.
There was a shade of disdain in the smile of my interlocutor, himself in fine physical condition, and perhaps too confident of his own mental balance. But, after all, my dictum does not refer to invalids alone; it applies to everybody; to us physicians equally as to our patients, to educators of all kinds as well as to their purpose.
When one considers the life of the mind, it becomes no longer possible to divide humanity into two classes, the sick and the well. Neurasthenia, of which one hears so much nowadays, is not a disease that attacks us like rheumatism or tuberculosis; it is the psychic form of human weakness that we owe to our natural and hereditary defects, to our badly directed education, to the vicious influences which act upon us during our entire physical and mental development. It is not a weakness of nerves such as the word "neurasthenia" implies; it is, above all, mental debility, and "psychasthenia" is the word to express it.
When hereditary and constitutional in- fluences seem to predominate, the debility is accounted illness; it appears essentially physical because it manifests itself by functional troubles, by intellectual blemishes — the forerunner of moral decay.
It is to the physician that these disinherited, these degenerates apply; for them, the world has sympathy only when their suffering is at its height. They are closer to us than you imagine, you who judge others severely and take pride in your own mental poise; remember that no man is a hero either to his physician or to his valet or to those who know his private life.
Each one of us has some defect due to heredity. Education itself plays an immense part in forming these pathological mental conditions; it spoils the judgment of those who call themselves normal and who imagine themselves in a position to cast a look of contemptuous pity upon their less fortunate brethren. In the Carnavalet Museum in Paris is an autograph of Alexandre Dumas the Younger that is worth a whole treatise on philosophy.
It says: "How does it happen that while children are so intelligent, men are so stupid."
the book details : Download 4.7 MB