Notes on the composition of scientific papers 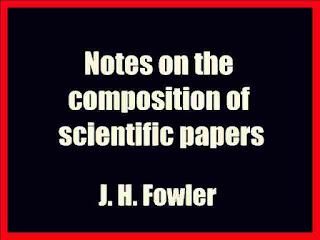 In the course of the year, I peruse sixty or seventy theses for the degree of M.B. and about twenty-five for the degree of M.D. The matter of these theses is good, it is often excellent; in composition a few are good, but the greater number are written badly, some very ill indeed.
The prevailing defect of their composition is not mere inelegance; were it so, it was unworthy of educated men: it is such as to obscure, to perplex, and even to hide or to travesty the sense itself. Thus, for the judge who would be just, many of the theses are very hard reading; and, meritorious as in substance they may be, are, as they stand, unfit for the printer.
The use of thesis-writing is to train the mind, or to prove that the mind has been trained; the former purpose is, I trust, promoted, the pieces of evidence of the latter are scanty and occasional. Thus, when the Act is kept, we are often forced, against our desire, to dwell on faults of form to some exclusion of the argument. It seemed to me, therefore, that if. by a collection of the commoner errors and defects, once for all I were deceived in my hope of bringing about some reformation of the essays, I might at any rate so economise my censures of the manner as to devote myself in future to the matter only. I fondly supposed that these criticisms of form might be put together for the press, as an open letter, in a few afternoons: I was sadly deceived.
The task proved to be far heavier than I had anticipated. Moreover, for the humble duty I set before myself I had made no special preparation; I had read no grammars, nor the handbooks of literary artists. The treatise of Mr Miles on Essay-writing appeared "before my manuscript was finished, but by a mischance his volume — though kindly dedicated to me — had failed to reach me. Mr Cornford's book appeared after my little work was done.
Yet I am glad I did not see these books, or others of the kind, lest at the beginning I might have been tempted by such bright examples far out of my narrower way. The books of Mr Miles and of Mr Cornford are systematic and constructive, they survey the field and the methods of authorship; my hints, if, as I trust, they have some organic unity, are but comments on the more frequent or the more eminent defects of scientific essays, and areas unsystematic and occasional as the defects themselves. I have observed no scheme or proportions in my parts but those of the faults and errors after which they are designed.\
I publish it now for the first time, as both for form and substance Mr Cornford's disciples may find it a useful pattern in the art of " painting shadows in imaginary lines." In obedience to a general desire I have divested these critical notes of the peculiarly medical features which they had at first; while preserving their immediate purpose, I have exchanged many of my medical instances for others of a pleasanter kind; nevertheless, this tract is intended chiefly for my own students, and is chiefly concerned therefore not with letters as a whole but with so much of the form and correctness of scientific papers as my experience tells me is perverted or neglected by their authors.