Retail selling; a guide to the best modern practice 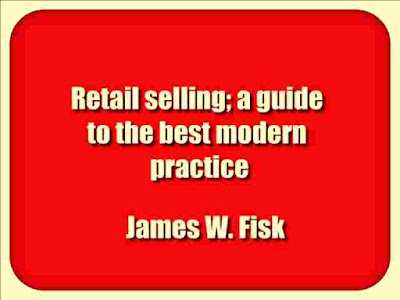 From the editor's introduction:
This series, of which the present volume on retail selling is the first to appear, is intended to be first of all practical. Each volume is prepared by a man who is having or has recently had broad experience in retailing.
At the same time, the authors have enjoyed excellent facilities for studying the methods of successful merchants in connection with teaching and research positions. Therefore they represent the ideal combination — ^the practicality of the successful worker in the subject with the thoroughness of the trained student.
In this, it is believed the series differs from anything previously attempted. The purpose of each volume is to develop from actual present-day practice certain simple principles and illustrate them by examples from the experience of the progressive storekeepers in various lines. No attempt is made to develop an academic theory of ideal merchandizing.
At the same time it is hoped to show a few principles which have been proved beyond a doubt, and thus to go as far as is possible in each section of the subject as a science. Only recently has anything of this sort been possible.
The success obtained during the past decade or two by the department store, the chain store, and the mail-order house has led merchants generally to stop and consider the methods of each class of stores. Much each retailer finds is not adapted to his store. However, he is learning to think out his problems just as the manufacturer has developed scientific methods for his work. So the result is doubly valuable, for the ideas which can be adopted at once, and for the new ones which personal analysis will bring out. And as the storekeeper)er becomes a student of marketing, he finds his first job is to train himself and his clerks to be more than order-takers to be real salesmen.
He is eager to learn of the methods used to teach selling by his up-to-date competitors and particularly in department stores and chain stores. However, he finds it difficult to obtain complete information or to use such methods without modification of a sort not easy for a person without teaching experience.
The manufacturers and jobbers have finally realized the advantage which will accrue to themselves as well as to the merchant from active co-operation. But it is not an easy task, for all the problems of the retailer are new to them, and few wholesalers have complete facilities for assisting merchants or even the material in teachable form.
So in this series, the first volume takes up the definite task of explaining in simple fashion how to determine selling opportunities and policies, and how to organize and train the salespeople in any retail store.
The author has chosen his material from his personal experience as a manager and sales manager in various types of stores, and from that of many others. He wishes me to acknowledge assistance from all those who during a retailing career of twenty years have given him their best; and particularly to Prof. Ralph Starr Butler of the University of Wisconsin; Paul H. Nystrom, recently of the University of Minnesota; B. M. Rastall, formerly of the University of Wisconsin; W. T. Grant, of the W. T. Grant Stores; William B. Towsley, of Marshall Field & Company; Frank Farrington, editor of Successful Storekeeping; and W. J. Pilkington, editor of the Merchants Trade Journal. It is believed from the reports of various men who have read the volume in manuscript, and to whom both author and editor are much indebted for helpful criticisms and suggestions, that it will prove representative of the best retail practice today.
The mastery of the subject should be the first step in the training of the successful storekeeper. Furthermore, since practical business methods are receiving more and more attention in our colleges and high schools, it is believed that these volumes will be found valuable in educational fields.

Chapter I.
The Analysis of the Selling Field .... 3 Locating a Store — Reorganizing a Store — Analysis is Business Foresight — Why Should the Business Exist? — The Buying Power of the Community — Analysis of a Factory Community — Analysis of a Farming Community — Analysis of Mercantile Class — Other Classes of Customers — Analysis by Sections of the City — What Each Customer Spends — Effect of Nationality on Selling Field — Effect of Sectional Conditions on Trade — Outside Sources of Revenue — The Store Site — Density of Population in Location Selected — Other Conditions to Consider.
Chapter II.
The Analysis of the Competition 16 The New Store Must Be a Pace-maker — Competition with Neighborhood Stores — What to Know about Your Competitors — The Man Back of the Store — The Store's Past — Business Policies — The One-price Policy — The Cut- price Policy — Shopping Plan — Clerks for Outside Shopping — Details of the Shopping Plan — Competition from Department Stores — ^Effect of Convenience — Effect of Size — Advertising Power — Meeting Competition — Disadvantages of Department Stores — Do Department Stores Have Better Assortments? — Relative Advantages of Small and Large Stores — Competition with Chain Stores — The Growth of Chain Stores — Why the Chain Stores Prosper — Turn - over — Organization — Realty Operations — Buying— Selling— Standard Practice — Effect of Chain Stores on Department Stores — Effect of Chain Stores upon Independent Retailers — The Mail-order House — Mail- order Service in Department Stores — Manufacturer-to-consumer Service — Exclusive Mail-order Retailers — Competing with the Mail-order House — Weighing and Using the Retailer's Advantages — Analyzing their Catalogue — Buying for Competitive Needs — Displajang Competing Merchandise — A Mail- order Department in a Small Retail Store.
Chaptee III.
The Determination of Sales Policies ... 47 Necessity for Retailing Policies — Basis for Deciding Policies — Causes of Success — Causes of Failure — Lessons from Analysis of Failures — Class of Trade for Whom Store Caters — Price Competition or Service Competition — Price Policy — Slow- selling Systems — Loss Leaders — Refunds and the Return- goods Problem — Adjustments — Errors — Nationally Advertised Goods — Creating Good-will.
the book details :
Download 7.6 MB