The psychology of religious experience 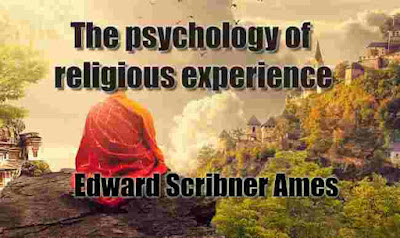 This work undertakes an investigation of the religious aspect of normal human experience. The point of view employed is that of functional psychology, which is necessarily genetic and social. The method adopted involves the use of much material from anthropology, the history of religion, and other social sciences, but an attempt has been made to organize this material and to interpret it from a psychological standpoint.
The hypothesis that religion is the consciousness of the highest social values arose from studies in these fields, and this conception has been strengthened by further investigations. These highest social values appear to embody more or less idealized expressions of the most elemental and urgent life impulses. Religion expresses the desire to obtain life and obtain it abundantly-
In all stages, the de- mand is for "daily bread" and for companionship and achievement in family and community relationships.
These cravings constitute the inner continuity and identity of motive in all the diverse types of religion, primitive and modern, Pagan and Christian.
The social consciousness arises in every group in the mediation of these needs, in the struggle for existence, and in the aspiration and endeavour to make life more varied, more adequate, and more ideal. In their simpler expressions among primitive peoples, these cravings struggle blindly, being dominated by rigid custom, and by magic.
In higher forms, they are gradually freed from superstition, are guided by tested experience, and are incorporated in more elaborate symbols. In this conception of religion as the consciousness of the highest social values, lies a partial justification for the rather ambitious task of bringing together in a single volume an outline treatment of so many problems.
Several studies have appeared treating primitive religion and the religion of particular races; others have dealt with the phenomena of conversion, of faith, of mysticism, and of other special interests with which the current religious reconstruction is concerned. It seems desirable, however, to bring all these phenomena into the perspective of a comprehensive psychological inquiry.

I. HISTORY AND METHOD OF THE PSYCHOLOGY OF RELIGION
I. The History of the Science 3
II. The Psychological Standpoint, 15
PART II. THE ORIGIN OF RELIGION IN THE RACE
III. The Determining Impulses in Primitive Religion. 33
IV. Custom and Taboo 51
V. Ceremonials and Magic 71
VI. Spirits 95
VII. Sacrifice 116
ViII. Prayer 134
IX. Mythology 149
the book details : Download 14 MB