The power of thought; what it is and what it does 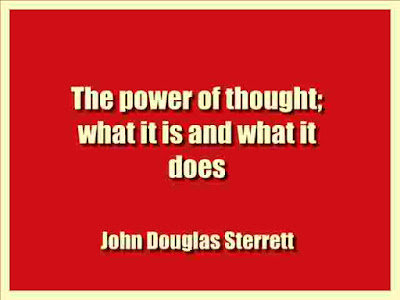 I AM glad to be able to write a few words in appreciation of tlie book of Mr Sterrett; for I find it in many respects a timely and valuable work. And since my opinion is entirely professional, based on psychological reasons — for I have never known Mr Sterrett personally — it may serve to bring the book more quickly to the notice of those who are likely to value it.
Mr Sterrett seems to have done what many pro- fessed psychologists would like to be able to do, i.e., to write a book which interests people generally, without repelling them by scientific terms and phrases unfamiliar to the lay mind; and at the same time not to fall into that other pit of popular science writers, the condemnation of having cheapened science by watering it.
And this general expression may serve to indicate the two merits which, to my mind, commend the present book. In the first place, Mr Sterrett's style is sufficiently noteworthy to draw favourable notice to his work. It is refreshingly spontaneous, unaffected, and telling; and the diction is individual and striking while not strained. For my own part, I am free to say — even though it involves a personal confession — that many of the current works on psychology seem to me in style hard, unliving, and rein wissenschaftlich, after reading the vivid English in which Mr Sterrett puts his thought.
And in the second place, I find Mr Sterrett's pages filled with points of view which are those of the latest scientific investigators. This is to be a matter of great interest; for Mr Sterrett has written partially apart from the current discussion.
His personal semi-isolation has not impaired his results; but the rather has it heightened the effect of his personal talent, and at the same time served to give a very unusual naturalness and convincing quality to the truths which the new scientific terms and formulas make, in a measure, rigid and for- bidding. I might point out such points of view in larger numbers, but it may suffice to signalize certain of the greater doctrines which give the main purpose and character to the work. One such point of view is that which Mr Sterrett has embodied in his title,
"The Power of Thought," which furnishes the real motive of the whole. The doctrine that all action is the outcome of thinking, in some shape; that conduct only reveals, and cannot help revealing, the progress of knowledge — this is now just getting to be a doctrine of common acceptance under such terms as "Suggestion," "Motor Elements," "Dynamogenesis," etc.