Vocabulary of philosophy and student's book of reference

on the basis of Fleming's vocabulary 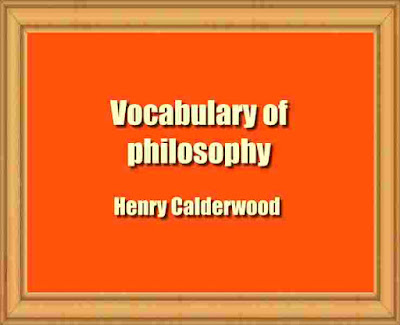 This book is a dictionary of philosophical terms that are arranged alphabetically. the dictionary by Henry Calderwood based on Fleming's vocabulary
Fleming's Vocabulary of Philosophy has appeared in Four Editions, two of which were edited by me after the Author's death. The Vocabulary and Student's Book of Reference now published is still on the basis of Fleming's, but it is substantially a new book. The leading features of the present volume are these three:
1. Definitions of Philosophic Terms, showing changes in usage which have occurred;
2. Quotations from authors, supplying indications of the philosophic theory adopted;
3. Additional References for guidance in the use of a University or Public Library. !N^umerous modifications in the use of terms have occurred within recent years, and very considerable additions have been made.
As Zeller has fitly said, Philosophy becomes increasingly dependent on " collecting, criticising, and making up new material."
The most important additions now presented appear in two groups: — those which represent the marked intellectual activity, singularly able in character, of the Hegelian or Neo-Kantian school, unfolding Hegelian thought by a critical return upon Kant; and secondly, those which indicate the fresh life infused into Psychological study by the advance of Biological science, and by the patient research and brilliant discoveries in the region of Physico-Psychology, led by Fritsch and Hitzig in Germany, and by Ferrier in our own country, and followed up in many laboratories in Europe and in America.
Example:
ABSOLUTE— Independent, — undetermined by relations. " The Absolute " is the Self-existent, Self-sufficient Being, — the Uncaused, — restricted neither in being nor inaction, by anything the universe contains. The term Absolute is the correlative of Infinite. Its proper significance is well indicated in Spinoza's definition of Substance. .
" That which exists in itself and is conceived through itself, that is, that the conception of which needs the conception of no other thing by which it may be conceived." Ethics, pt. i. def. 3.
The adjective "absolute" is used to indicate any existence or truth, regarded in itself as complete, apart from accidental features, or phenomenal manifestations. Thus, " absolute truth "; and in Ethics, " absolute law,'' that is, authoritative independently of inducements.
This usage in the service abstract thinking, readily becomes artificial and misleading, as when reference is made to " absolute becoming." Hamilton used Absolute, as opposed to The Infinite, to designate what is finished, perfect, complete. Such usage has been of slight account in Philosophy.
the book details : Download Vocabulary of philosophy - 9.2 MB