The crowd in peace and war 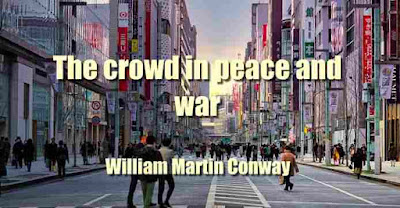 Man has never decided whether to be a gregarious animal or not. Individuals and socialism attract him alternately. He swings like a pendulum from one to the other.
At times he merges himself completely in some group or crowd and loses his identity there like a sheep in a flock. Then he lives and moves and has his being in the crowd. He follows its routine; esprit de corps determines his ideals and dictates his emotions.
He is like a soldier in a regiment, or a cell in living tissue: a mere unit whose life, joy, and passion it is to contribute his portion of vitality and power to the larger life of the whole group, or as our brave soldiers say, "to do his bit." At other times man adopts the attitude of complete detachment from his fellows, like Thoreau at Walden, or a Theban hermit in his desert cave. The crowd then is nothing to him. His aim is to be self-sufficing — to think his own thoughts, go his own ways, provide for his own needs, and perhaps save his own soul.
He no longer resembles a sheep in a flock or a wolf in a pack, but remains aloof, like some lonely condor circling in the blue, with even the high Andes far beneath him, and his nearest fellow, visible only to vision keen as his, Likewise isolated miles away in the depths of the air. Much has in recent years been written about the Crowd and its psychology, yet for the most part from quite restricted points of view, as if the only Crowds to be considered were but two, — the Mob and the Pubhc: the Mob as any disorganised or weakly organised assemblage of people; the Public as what we all know and need not define, the general body of inhabitants of a given area organised mostly by newspapers.
Yet there are many other crowds to which an individual may belong beside these two, and it may serve to clear the ground if we consider a few of them briefly.
To begin with there are what we ordinarily designate as crowds: that is to say assemblages of human beings, all physically present together at one time and within one area, each individual conscious of the presence of the next. A mob is the least admired form of such a crowd, the term usually implying not merely the simultaneous presence of a number of people, but that their behaviour is more or less disorderly.
A public meeting is usually a well-behaved crowd, but may at any time degenerate into a mob; it is to a large extent a chance assembly of people who have never come together in their entirety before and will never assemble again, the link between them is therefore felt to be of a transitory kind. A theatre audience is of like character in the constitution but differs from a public meeting in that it assembles for another end and knows what it expects.
Kinds of Crowds experience. different again is a congregation and on a higher plane, both of organisation and purpose; whilst a regiment on parade is likewise and obviously another and more elaborately organised assemblage.