Naturalism and religion - by Rudolf Otto 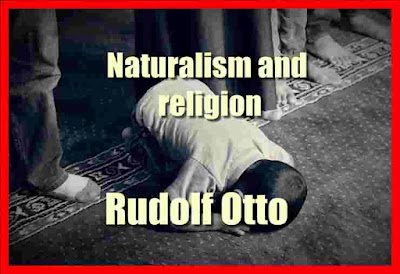 From the introduction:
It is a remarkable and in some respects a disquieting fact that whilst rival ecclesiastical parties are engaged in a furious and embittered debate as to the precise shade of religious instruction to be given in public elementary schools, the thinking classes in modern Europe are becoming more and more stirred by the really vital question whether there is room in the educated mind for a religious conception of the world at all.
The slow silent uninterrupted advance of research of all kinds into nature, life, and history, has imperceptibly but irrevocably, revolutionised our traditional outlook upon the world, and one of the supreme questions before the contemporary mind is the probable issue of the great struggle now taking place between the religious and the non-religious conception of human life and destiny.
When we look at the development of this great fundamental conflict we feel that disputes between rival ecclesiastical systems are of the trifling moment; the real task at the present time before every form of religion is the task of vindicating itself before a hostile view of life and things.
It is the consciousness of this fact that has led to the translation and publication in English of Professor Otto^s volume. Professor Otto is well known on the Continent as a thinker who possesses the rare merit of combining a high philosophic discipline with an accurate and comprehensive knowledge of the science of organic nature.
It is this combination of aptitudes that has attracted so much attention to his work on Naturalism and Religion, and which gives it a value peculiar to itself. At a time when so much loose and incoherent thinking exists about fundamental problems, and when so many irrelevant claims are made, some- times on behalf of religion and sometimes on behalf of hypotheses said to be resting upon science, it is a real satisfaction to meet with such a competent guide as Dr Otto.
Although his book is written for the general reader, it is, in reality, a solid scientific contribution to the great debate at present in progress between two different conceptions of the ultimate nature and meaning of things. As such it is to be hoped that it will receive the favourable consideration that it deserves at the hands of the English-speaking world.

The title of this book, contrasting as it does the naturalistic and the religious interpretation of the world, indicates that the intention of the following pages is, in the first place, to define the relation, or rather the antithesis, between the two; and, secondly, to endeavour to reconcile the contradictions, and to vindicate against the counter-claims of naturalism, the validity and freedom of the religious outlook. In doing this it is assumed that there is some sort of relation between the two conceptions and that there is a possibility of harmonising them.
Will this be admitted? Is it not possible that the two views are incommensurable, and would it not be most desirable for both sides if this were so, for if there is no logical antithesis then there can be no real antagonism?
And is not this actually the case? Surely we have now left far behind us the primitive expressions of the religious outlook which were concerned with the creation of the world in six days, the making of Eve out of Adam's rib, the story of Paradise and the angelic and demoniacal forces, and the accessory miracles
the book details : Download 7.8 MB