A manual of essay-writing 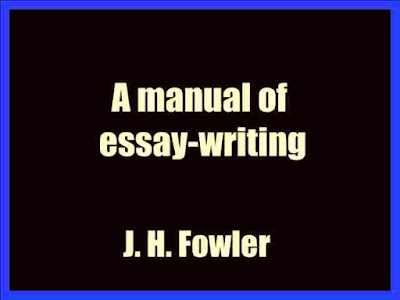 This little book aims at giving more systematic guidance in the art of essay-writing than is usually attempted. Many teachers, I am aware, are sceptical as to the value of such an attempt. They feel the importance of spontaneity and individuality, and they are rightly of opinion that an essay cannot possess these qualities if it proceeds rigidly on lines laid down for the writer by somebody else.
On the other hand, if must be a matter of common experience that much of the time spent on the writing of essays is fruitless because it is aimless; and it seems to me that, without introducing any rules that would fetter individuality, something may be done in several directions to make the practice of essay- writing both easier and more fruitful than it is at present. First, I believe that a good many hints on style and treatment may profitably be given.
Without attempting to lay down arbitrary rules, one may say that there are certain positive qualities that every good essay ought to possess, and these may be usefully indicated. In particular, in every essay which undertakes to prove anything, the argument ought to be clear, orderly, and logical, and hints may be given on the construction and setting forth of a consecutive argument. Or, again, different styles are proper to different subjects, but most subjects fall into one of half a dozen classes, and some suggestions may be made as to the style proper for each class. Even those who disbelieve in the value of positive hints may admit the usefulness of negative cautions.
The beginner may be taught to avoid a good many pitfalls, and warned against common mistakes; for experience shows that the majority of young writers are liable to the same kind of errors, and the experience of the teacher ought here to be of some use to the pupil. Secondly, I believe that more ought to be done in the way of pointing the pupil to the sources from which he may obtain material.
To write an essay " all out of one's own head " is only a profitable exercise if the head has something in it. To ask a boy who has perused little beyond the "vacant chaff" of the illustrated magazines and newspapers, and who has never been expected to converse in any dialect but a slovenly slang, or upon any subject but athletics, to write an essay upon a theme entirely out of his range and without preparation, is to set him an impossible task.
The true preparation for essay-writing ought doubtless to begin very early — in the home and the preparatory- school; in the adoption by parents and schoolmasters, for themselves as well as for their pupils, of a higher standard of thought and speech than that which is commonly observed. But such a suggestion may seem presumptuous here, and its consideration is beyond my present purpose. My wish is merely to propose that the pupil should more often be taught what books to read for his essay and how to read them — how to assimilate and not merely to " convey "; or, again, that he should be given a hint of some train of thought that he may follow up for himself.
The object clearly kept in view in the giving of all such help should be to stimulate thought in the pupil, not to supersede it: to save the time too often spent in an aimless " moving about in worlds not realised" which leads to no result, and to set it free for intelligent thinking.