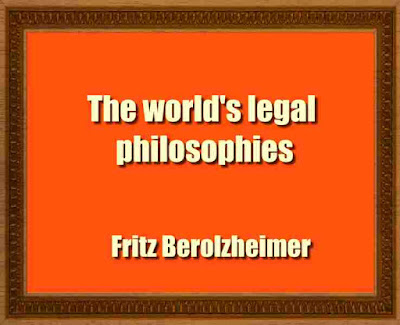 From the translator preface:
"Until either philosopher become kings," said Socrates, "or kings philosophers, States will never succeed in remedying their shortcomings." And if he was loath to give forth this view, because, as he admitted, it might "sink him beneath the waters of laughter and ridicule," so today among us it would doubtless resound in folly if we sought to apply it again in our own field of State life, and to assert that philosophers must become lawyers or lawyers philosophers, if our law is ever to be advanced into its perfect working.
And yet there is hope, as there is need, among us today, of some such transformation. Of course, history shows that there always have been cycles of legal progress and that they have often been heralded and guided by philosophies. But particularly there is hope that our own people may be the generation now about to exemplify this.
There are several reasons for thinking our people apt thereto. But, without delaying over the grounds for such speculations, let us recall that as shrewd and good-natured an observer as DeTocqueville saw this in us.
He admits that "in most of the operations of the mind, each American appeals to the individual exercise of his own understanding alone; therefore in no country in the civilized world is less attention paid to philosophy than in the United States." But, he adds, "the Americans are much more addicted to the use of general ideas than the English, and entertain a muchgreater relish for them."
And since philosophy is, after all, only the science of general ideas — analyzing, restating, and reconstructing concrete experience — we may well trust that (if ever we do go at it with a will) we shall discover in ourselves a taste and high capacity for it, and shall direct our powers as fruitfully upon the law as we have done upon other fields. Hitherto, to be sure, our own outlook on juristic learning has been insular.
Tlie value of the study of comparative law has only in recent years come to be recognized by us. Our juristic methods are still primitive, in that we seek to know only by our own experience, and pay no heed to the experience of others. Our historic bond with English law alone, and our consequent lack of recognition of the universal character of law as a generic institution, have prevented any wide contact with foreign literature. While heedless of external help in the practical matter of legislation, we have been oblivious to the abstract nature of law.
The philosophy of law has been to us almost a meaningless and alien phrase. "All philosophers are reducible in the end to two classes only: utilitarians and f utilitarians," is the cynical epigram of a great wit of modern fiction. And no doubt the philistines of our profession would echo this sarcasm. And yet no country and no age have ever been free (whether conscious of the fact or not) from some drift of philosophic thought.
"In each epoch of time," says M. Leroy, in a brilliant book of recent years, "there is currently a certain type of philosophic doctrine — a philosophy deep-seated in each one of us, and observable clearly and consciously in the utterances of the day — alike in novels, newspapers, and speeches, and equally in town and country, workshop and counting-house."
Without some fundamental basis of action, or theory of ends, all legislation and judicial interpretation are reduced to the anarchy of uncertainty. It is like mathematics without fundamental definitions and axioms.
.Amidst such conditions, no legal demonstration can be fixed, even for a moment. Social institutions, instead of being governed by the guidance of an intelligent free will, are thrown back to the blind determinism of the forces manifested in the natural sciences. Even the phenomenon of experimental legislation, which is peculiar to Anglo-American countries, cannot successfully ignore the necessity of having social ends.
the book details : Download 11.8 MB