The yoga of the Kaṭhopanishad 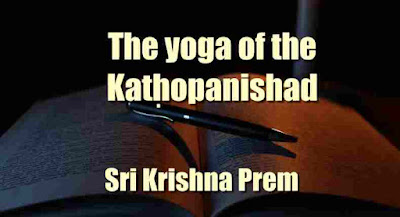 The point of view from which this book has been written is that the Kathopanishad is a practical treatise written to help us achieve a very real end. It is not in the least a compendium of Brahmanical speculations, something to be studied from a purely intellectual viewpoint.
On the contrary, it is an exposition of the ancient road that leads from death to immortality, a Road that is as open today as it was when our text was written. Being a real Road the knowledge of it is not confined to any one country or to anyone religious tradition.
One of. the aims in writing this commentary have been to bring out this fact, namely, that it is a Road known to a few all over the world and that, though their descriptions have naturally varied in detail, they all refer to what is recognisably the same experience. Previous expositions have been either from the point of view of purely Indian tradition, in terms of which alone the meanings have been set forth, or else they have been made from the artificial and external standpoint of Western scholarship which represents the teachings as being, at best, interesting religious-philosophic speculations, at worst, a tale told by an idiot, signifying nothing.
With this last class of expositors, it is hopeless to argue that their interpretations often make nonsense of the text for they will reply: "My dear Sir, of course, it is nonsense. Why do you expect anything but the merest gleams of sense in these ancient phantasies of a childish era?" So be it. It was at least in part to hide the truth from such as these "lest having ears they should hear and be converted" that the 5 Preface ancient Teachers expressed themselves so obscurely with the aid of symbol and myth. This brings us to another point. There will almost certainly be those who will say of the present commentary, at least in places, that it darkens rather than sheds light upon the text.
"The text," they will say, "was tolerably clear and straightforward, you have left us wandering in a cloud of your incomprehensible Black Fire! At least you are the first (and we hope the last) to treat the Upanishad as a text of alchemy !" The fact is, however, that clarity (of the intellectual sort), though undoubtedly a value, is not the only value.
The true clarity which is of the Spirit is something quite different, but what is usually termed such is a one-sided movement of mental abstraction which, like everything one-sided, has ^ shadow which in this particular case appears as loss of beauty.
As long as we remain what we are, partial and one-sided beings, so long each step in the direction of intellectual clarity is taken at the cost of a loss of vividness and vitality until we arrive in the end at the state of logic and mathematics, a state like that of distilled water, exquisitely clear but tasteless and sterile. On the other hand, if the archaic symbols are left without any mental clarification the modern mind is unable to grasp them at all and passes them by as meaningless.
Accordingly, any attempt at comment must, like any attempt at translation, be a compromise, in this case between the degree of clarity necessary to give any sort of clue to the meaning and the degree of vividness coming from the sense of rich psychic background, necessary if the subject is to appear to have any true reality. Naturally, the proportions of these two components will have to vary according to conditions of time and place.
These days there is little danger of clarity being undervalued but rather the other way. Preface A previous book^ was written with as much of it as possible. In this book, partly because it is hoped that the previous one will serve as a bridge and partly because the Upanishads have been so pawed about by intellectuals as to be in danger of being thought mere 'philosophy,' less attempt has been made to render the meaning clear to the mind.
Whether the complementary value of psychic vividness has been achieved is for others to judge. If I have at all succeeded in conveying the impression that behind the words of the Upanishad
He's, not a world of thin philosophic abstractions, but a world of rich and vivid experience, I shall be satisfied. "Grey is all theory, green grows the Tree of Life alone."

Chapter I .' 13
The Sacrifice of Vajashravasa; the Journey of Nachiketas to the Halls of Death; the granting of the Three Boons, the Boon of Return, the Boon of the Sacred Fire, the Boon of Knowledge of the Liberated State.
Chapter II 50
The Choice between the Better and the more Pleasant; the need of. the Teacher; the World of Heart's Desire; The Mystic Word; the Atman as the Union of the Opposites.
Chapter III .. .. .. .. .. ..119
The Two Birds; the Rainbow Bridge; the Chariot of the Soul; the Ladder of Being; the Method of Yoga
Chapter IV 186
The Outward and the Inward Gaze; the Atman as the Basis of all experience; the Cosmic Three; the Hermetic Axiom and its attainment; the Dwarf in the Heart.
Chapter V 214
The Ruler of the City; the Heavenly Stallion; the Two Breaths; the After-death Paths; the Atman to be sought within the self; the Inner Sea of Light.
Contents
Chapter VI 246
The Tree of the World; the Great Fear; how the Atman is seen in the different Worlds; the Hierarchy of Being and the Path of Yoga; the Viewless, Speechless Goal; the cutting of the Knots of the Heart; the Subtle Middle Path; the untaught Further Way.
the book details : Download The yoga of the Kaṭhopanishad - 7 MB