Introduction to the study of language 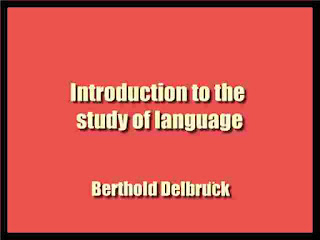 The character of the present work is mainly determined by the circumstance that it is intended by the author to facilitate the study of the "Grammars" which Breitkopf & Hartel are publishing, as well as the comprehension of comparative philology in its newest form.
The field of this "Introduction" is no broader than that of the above-mentioned "Grammars". Wherever in the follow- ing pages language, language development, phonetic laws etc. are discussed, an Indo-European language, Indo-European language development etc., must alone be understood.
I have felt less inclined to discuss questions that lie outside the Indo-European domain, as for example those suggested by universal philology, because in reality the influence of philosophical linguistic research upon the science founded by Bopp has always been of slight account, and is very trifling at present. In limiting myself to the departments of phonetics and inflexion
I have also followed the "Grammars", but I must acknowledge that I should not, perhaps, have practised this self-denial if I had not just shown, in the fourth volume of my syntactical investigations [Die Grundlagen der griechischen Syntax, Halle, 1879), how in my opinion the comparative syntax of the Indo-European languages should be treated.
The book here laid before the public is divided into a historical and an analytical part. In the former, the development of philology from Bopp's time to the present is roughly sketched with the especial aim of showing clearly how the problems which particularly occupy our attention today have developed naturally from what preceded them; in the second part, the most important of these problems are discussed.
In the fifth chapter (Agglutination Theory) I have expressed myself with more scepticism and reserve than formerly. But I have thought it best not to suppress my present views, since they are the result of mature deliberation, and I cannot believe that I shall ever have a more decided opinion on these points. In the sixth chapter (Phonetic Laws) I hope I have shown that the harmony between the re- representatives of different tendencies is greater than the uninitiated would be inclined to suppose, possibly greater than is recognized by many of these representatives themselves. All these discussions, as well as the historical part (chapters I — IV) and the seventh chapter (on the Separation of the Races) , are not written for the narrow circle of my fellow-workers in this field, but mainly for those who do not make a special study of comparative philology.
For this reason, I have made use, so far as I was able, of the exceedingly abundant philological literature, but have quoted it only to a small extent. In conclusion, I would like to say a word respecting my judgment of living scholars. In characterizing great men who are deceased, like Bopp and Schleicher, I have imposed no restraint upon myself, but to proceed in the same way with reference to the living seemed to be unfitting. I have accordingly never attempted to picture in full the distinguishing characteristics and achievements of any living philologist, while I have not hesitated to define my position in regard to single views of my contemporaries.
To this point, I would fain call the attention of those readers who perhaps might be inclined to think that I have not done justice to this or that eminent living philologist. Jena. August 20, 1880.
In writing the present work, my only thought was to introduce some of my countrymen to the study of the Indo-European languages and to call their attention to certain points in the history and present condition of this study. Accordingly, the preface, as well as my treatment of the subject, were destined for German readers.
On this account it seems to me, especially important that the English translation should be pre- ceded by a few words of explanation, or, I might almost say, of apology. Above all, I would deprecate any comparison of this short and unpretentious "Introduction" with the extensive works of Max Muller, Whitney and Sayce.
I by no means aim to furnish an explanation of the nature of language in general, as these scholars have done; it is only my wish to show how a minute section of the whole linguistic mass has been studied, and in my opinion, ought to be studied. It is true that in one chapter, that which treats of agglutination, I touch on more general ground, and it would perhaps have been better if here I had at least attempted to discuss my disagreement with Sayce's views somewhat in detail. I hope that in case of a second edition I shall be able to extend my original plan in this direction.
the book details : Download 4.8 MB