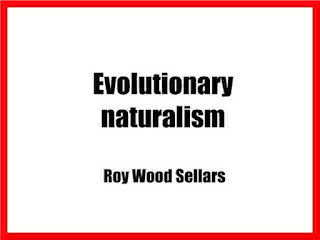 From introduction
To paraphrase a saying which gained considerable notoriety a decade ago in the field of politics, we are all naturalists now. But, even so, this common naturalism is of a very vague and general sort, capable of covering an immense diversity of opinion.
It is an admission of a direction more than a clearly formulated belief. It is less a philosophical system than a recognition of the impressive implications of the physical and the biological sciences. And, not to be outdone, psychology has swelled the chorus by pointing out the organic roots of behaviour and of consciousness. But just because an adequate naturalism has never been formulated and defended, we find that litany who are naturalistic in their general outlook is yet sharp in their criticism of naturalism as a philosophy.
Why is there this apparent contradiction? Why is there this conservative withholding of allegiance to naturalism on the part of the majority of philosophers? Why is naturalism insistently defined in so narrow a way that it becomes a thing of straw easily torn to pieces? This situation has awakened my interest and I wish to say a few words about it.
To define naturalism in a narrow and indefensible way and then to tear it to pieces may be a pleasant enough dialectical exercise, but surely it is not consonant with the serious aim of philosophy to discover the truth about nature and ourselves as children of nature.
There is something childish, rhetorical and merely verbal in this procedure, something which smacks of the lecture room instead of the laboratory. Such lecturers are in the habit of making remarks such as the following: "No philosopher today is a materialist," "Atheism has been completely discredited," "No one today knows what life is," etc. The vicious effect of such dicta is the encouragement of obscurantism. But among the more serious and competent thinkers, there is the effort to work out exact definitions and to do justice to the actual content of both science and philosophy.
Why, then, do so many of these, also, attack naturalism? The reason is, I think, twofold. First in order comes the recognition of the crying defects of the naturalism of a few decades ago. Second may be placed the momentum of idealism.
Clearly, there is a need for a new naturalism that has avoided the pitfalls into which the old naturalism fell. In this book, I have put forward what I call evolutionary naturalism, as being able to meet the objections of the past and to challenge acceptance. It is, I maintain, free from the defects of the old naturalisms which founded themselves upon the results of the exact sciences alone, leaving out the levels of organic and social behaviour. And it meets the momentum of spiritualism by the counter energy of the modern realistic movement.
Evolutionary naturalism is the reflection into a focal system and the inter- pretation of the general results of all the sciences. It is a system of philosophy. Nor would evolutionary naturalism stress science alone. All valid human experience can find a place in the Weltanschauung thus outlined. Those who desire to do justice to evolutionary naturalism must be on their guard against identifying it with some special meaning current in the past.
Let it be understood that I am not defending the naturalistic ethics of three decades ago, nor associational psychology, nor the naive philosophizings of Haeckel, Huxley and Spencer. These past naturalisms were products of their period, which is not ours. Evolutionary naturalism is the contemporary of pragmatism, genetic psychology, behaviourism, electronic physics, social ethics and epistemological realism. I pray that this is noted. Thus when G. P. Adams writes that "The very essence of naturalism lies in withdrawing ideas and loyalties from objective significant structures in which they may participate, and in viewing them as the fruition of natural life processes and interests,"^ he clearly has in mind the naturalistic ethics of the first flush of Darwinism.
Surely ideas must make good in the world and they must be prospective just as the organism is. Pragmatism has had many relevant things to say upon this point, yet American pragmatism is strongly biological and naturalistic in its outlook. But I feel certain that Professor Adams would not contest my interpretation.
Again, Balfour asserts that "The very essence of the physical order of things is that it creates nothing new. Change is never more than a redistribution of that which never changes,"^ he is as- summing a degree of Eleaticism in the outlook of science that I doubt is there. Modern science is beginning to accept the notion of creative synthesis. If naturalism founded itself upon denial of novelty, it would condemn itself to be a philosophy that could not account for experience as it is. Much theism has taken its leap with an outworn science as a springboard.
the book details : Download 7 MB