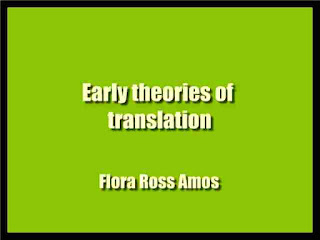 From the preface:
In the following pages, I have attempted to trace certain developments in the theory of translation as it has been formulated by English writers. I have confined myself, of necessity, to such opinions as have been put into words, and avoided making use of deductions from practice other than a few obvious and generally accepted conclusions.
The procedure involves, of course, the omission of some important elements in the history of the theory of translation, in that it ignores the discrepancies IjetWeeh precept and practice, and the influence which practice has exerted upon theory; on the other hand, however, it confines a subject, other- Wise impossibly large, within measurable limits.
The chief emphasis has been laid upon the sixteenth century, the period of the most enthusiastic experimentation, when, though it was still possible for the translator to rest in the comfortable medieval conception of his art, the New Learning was offering new problems and new ideals to every man who shared in the intellectual awakening of his time. In the matter of theory, however, the age was one of the beginnings, of suggestions, rather than of finished, definitive results; even by the end of the century there Were still translators who had not yet appreciated the immense difference between medieval and modern standards of translation.
To understand their position, then, it is necessary to consider both the preceding period, with its incidental, half-unconscious comment, and the seventeenth and eighteenth centuries, with their systematized, unified contribution.
This last material, in especial, is included chiefly because of the height which it throws in retrospect oh the views of rather translators, and only the main course of theory, by this time fairly easy to follow, is traced. The aim has in no case been to give bibliographical information.
A number of translations, important in themselves, have received no mention because they have evoked no comment on methods. The references given are not necessarily to first editions. Generally speaking, it has been the prefaces to translations that have yielded material, and such prefaces, especially during the Elizabethan period, are likely to be included or omitted in different editions for no very clear reasons.
Quotations have been modernized, except in the case of Middle English verse, where the original form has been kept for the sake of the metre. The history of the theory of translation is by no means a record of easily distinguishable, orderly progression. It shows an odd lack of continuity. Those who give rules for translation ignore, in the great majority of cases, the contribution of their predecessors and contemporaries.
Towards the beginning of Elizabeth's reign, a small group of critics bring to the problems of the translator both technical scholarship and alert, original minds, but apparently, the new and significant ideas which they offer have little or no effect on the general course of theory. Again, Tj^tler, whose Essay on the Principles on Translation, published towards the end of the eighteenth century, may with some reason claim to be the first detailed discussion of the questions involved, declares that, with a few exceptions, he has "met with nothing that has been written professedly on the subject," a statement showing a surprising disregard for the elaborate prefaces that accompanied the translations of his own century.
This lack of conseCutiveness in criticism is probably partially accountable for the slowness with which translators attained the power to put into words, clearly and unmistakably, their aims and methods. Even if one were to leave aside the childishly vague comment of medieval writers and the awkward attempts of Ehzabethan translators to describe their processes, there would still remain in the modern period much that is careless or misleading.
Contents:
I. The Medieval Period 3
n. The Translation of the Bible 49
in. The Sixteenth Century 81
IV. From Cowley to Pope 135
Index 181
the book details : Download 4.7 MB