Bygone beliefs, being a series of excursions in the byways of thought 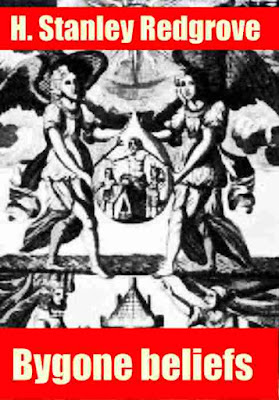 From introduction:
These Excursions in the Byways of Thought were undertaken at different times and on different occasions; consequently, the reader may be able to detect in them inequalities of treatment. He may feel that I have lingered too long in some byways and hurried too rapidly through others, taking, as it were, but a general view of the road in the latter case, whilst examining everything that could be seen in the former with, perhaps, undue care.
As a matter of fact, however, all these excursions have been undertaken with one and the same object in view, that, namely, of understanding aright and appreciating at their true worth some of the more curious byways along which human thought has travelled. It is easy for the superficial thinker to dismiss much of the thought of the past (and, indeed, of the present) as mere superstition, not worth the trouble of investigation: but it is not scientific.
There is a reason for every belief, even the most fantastic, and it should be our object to discover this reason. How far, if at all, the reason, in any case, justifies us in holding a similar belief is, of course, another question. Some of the beliefs I have dealt with I have treated at greater length than others because it seems to me that the truths of which they are the images — vague and distorted in many cases though they are — are truths which we have either forgotten nowadays or are in danger of forgetting.
We moderns may, indeed, learn something from the thought of the past, even in its most fantastic aspects. In one excursion at least, namely, the essay on " The Cambridge Platonists," I have ventured to deal with a higher phase — perhaps I should say the highest phase — of the thought of a bygone age, to which the modern world may be completely debtor. " Some Characteristics of Mediaeval Thought," and the two essays on Alchemy, have appeared in The Journal of the Alchemical Society.
In others, I have utilised material I have contributed to The Occult Review, to the editor of which journal my thanks are due for permission so to do. I have also to express my gratitude to the Rev. A. H. Collins, and others to be referred to in due course, for permission here to reproduce illustrations of which they are the copyright holders. I have further to offer my hearty thanks to Mr B. R. Rowbottom and my wife for valuable assistance in reading the proofs. H. S. R.

Preface
List of Illustrations
1 Some Characteristics of Medieval Thought
2. Pythagoras and his Philosophy
3 Medicine and Magic...
4. Superstitions concerning Birds
5. The Powder of Sympathy: a Curious Medical Superstition
6. The Belief in Talismans
7. Ceremonial Magick in Theory and Practice
8. Architectural Symbolism
9. The Quest of the Philosopher's Stone
10. The Phallic Element in Alchemical Doctrine
11. Roger Bacon: an Appreciation
12. The Cambridge Platonists
the book details : Download 6.9  MB -  contains illustrations