The psychology and pedagogy of anger 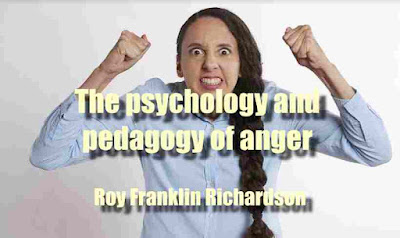 Excerpt from introduction:
Although emotions are recognized as among the most important mental phenomena, exerting a marked influence on other mental processes, they have had a comparatively little systematic investigation. We have our casual descriptions of emotions in terms of feelings, sensations and physiological effects.
We have our theories, accounting for the expression of the emotions, and our theories of the constituents of the emotive consciousness. The functional side of emotions, emphasizing the behaviour of consciousness, has been for the most part neglected. In looking over the literature on emotions, one is impressed by its theoretical and opinionated trend. Much of it is based on casual individual observations.
Attention has for the most part been directed to the most intense emotional experiences, neglecting the smaller emotions, important as they are in the behaviour of consciousness. Then psychology has concerned itself with the exciting period of the emotion, disregarding the consciousness preceding the emotion and that after the emotion has disappeared. From the functional aspect of emotions, some of the questions which invite study are as follows:
1. the mental situation, including the fore-period from which the emotion develops; 2. the behaviour of consciousness during the period the emotion exists ; 3. the manner of disappearance and diminution of the emotion; 4. the effect in consciousness after the emotion has disappeared; 5. individual differences in emotional life. The statement of Wundt (21) and Kiilpe (14) concerning voluntary action, that its mere period of duration is but a small part of its psychological significance, may well be said of emotions.
Wundt suggests the close relationship between emotion and volitional action. A volitional process that passes into an external act, he defines as an emotion that closes with a "pantomimic" movement. Ach (i), in his experiments with the will, distinguishes in each experiment a fore, mid and after a period. In our emotional experiences, it is true to a marked degree that we are pre-disposed and predetermined to a specific emotional excitement by temporar}^ or permanent dispositions and attitudes.
. The method in the present study has been to observe anger introspectively as it appears in everyday life. Ten graduate students of Clark University and two persons outside of the University volunteered to observe their emotions for a period of at least three months and report to the writer each day from the notes of their introspections. These persons were asked to observe all instances of anger and fear no matter how minute. Only anger will be used in the present study.
They were asked to observe the conscious fore-period before the emotion be- gins, the development of the emotion, the disappearance, the diminution and the consciousness after the emotion has dis- appeared, which is recognized as having been influenced by the emotion. Historically, three methods have been used in studying emotions. Casual individual introspection is the earliest and is consequently the basis for most of the literature. Bain (2) and Ribot (16) were among the first to employ this method extensively.
Observations of the behavior of normal and abnormal persons have given some results. The questionnaire method used by Dr Hall (11) has shown the wide range of objective reactions and objects of anger. Both anger and fear are deep-rooted psychic strata.
Introspections reveal motives of the selfish, unsocial and unlawful character, springing from a level lower than the social man. All observers have been quite frank in giving the full introspections, even when their most private and personal matters were concerned. Where illustrative material is used, it has been necessary to remove the personal element, as in many instances, others besides the observer were concerned. This revision has been the work of the writer.
The essential psychological factor is unchanged and the words of the observers are used as nearly as possible. The twelve ]jerscns will be called by the first twelve letters of the alphabet, and other persons named in the introspections will be called X. Y. and Z. Ten of the observers were graduate men students of psychology. Seven of these had had considerable experience in introspection under controlled laboratory conditions. Most of the illustrative data will be taken from the observations of A. B. C. D. E. F. and G. who are the most experienced observers.
No apology is offered for this study because of the uncontrolled conditions of introspection. Emotions are involuntary processes and consequently do not lend themselves to voluntary control necessary for laboratory techniques.
The emotion springs from an antecedent complex combined with a present idea. The fact that anger does not develop from a single experience but is a predetermined consciousness usually cumulative in character, makes voluntary origin difficult. Even when the individual is aware of the antecedent which tends to give rise to anger, the voluntary combination with a present idea is unsuccessful. A further difficulty in introspection is the tendency of the emotion to disappear as a result of the act of introspection. It occurs frequently in the data that further development of the emotion is entirely cut off by introspection. However, attention to the situation giving rise to anger frequently reinstates the emotion, if the feeling background is intense enough.
It was necessary to instruct the observers to allow their emotions to run their usual course and note the facts of behaviour at convenient times. The purpose of this study is to investigate the behaviour of consciousness in the development, expression and disappearance of anger.
The observers were asked to direct their observation, especially to the behavior side of consciousness. It is believed, that regardless of the necessary uncontrolled conditions of introspection, systematic observation of both mild and intense experiences of anger by a number of observers over an extended period of time will add to a better comprehension of the fictional character of this one of the fundamental emotions.
the book details : Download 2 MB