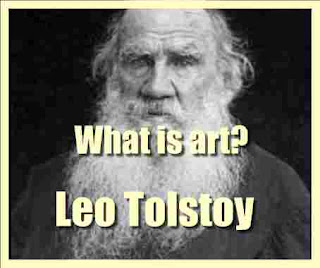 Translation and introduction by Aylmer Maude.
From the introduction:
What thoughtful man has not been perplexed by problems relating to art?
An estimable and charming Russian lady I knew, felt the charm of the music and ritual of the services of the Russo-Greek Church so strongly that she wished the peasants, in whom she was interested, to retain their blind faith, though she herself disbelieved the church doctrines. " Their lives are so poor and bare they have so little art, so little poetry and colour in their lives let them at least enjoy what they have; it would be cruel to undeceive them," said she.
A false and antiquated view of life is supported by means of art and is inseparably linked to some manifestations of art which we enjoy and prize. If the false view of life be destroyed this art will cease to appear valuable. Is it best to screen the error for the sake of preserving the art? Or should the art be sacrificed for the sake of truthfulness?
Again and again, in history, a dominant church has utilised art to maintain its sway over men. Reformers (early Christians, Mohammedans, Puritans, and others) have perceived that art bound people to the old faith, and they were angry with art.
They diligently chipped the noses from statues and images and were wroth with ceremonies, decorations, stained-glass windows, and processions. They were even ready to banish art altogether, for, besides the. superstitions it upheld, they saw that it depraved and per verted men by dramas, drinking-songs, novels, pictures, and dances, of a kind that awakened man s lower nature. Yet art always reasserted her sway, and today we are told by many that art has nothing to do with morality that "art should be followed for art s sake." I went one day, with a lady artist, to the Bodkin Art Gallery in Moscow. In one of the rooms, on a table, lay a book of coloured pictures, issued in Paris and supplied, I believe, to private subscribers only.
The pictures were admirably executed but represented scenes in the private cabinets of a restaurant. Sexual indulgence was the chief subject of each picture. Women extravagantly dressed and partly undressed, women exposing their legs and breasts to men in evening dress; men and women taking liberties with each other, or dancing the " can-can," etc., etc.
My companion the artist, a maiden lady of irreproachable conduct and reputation, began deliberately to look at these pictures. I could not let my attention dwell on them without ill effects. Such things had a certain attraction for me and tended to make me restless and nervous.
I ventured to suggest that the subject matter of the pictures was objectionable. But my companion (who prided herself on being an artist) remarked with conscious superiority, that from an artist s point of view the subject was of no con sequence.
The pictures being very well executed were artistic, and therefore worthy of attention and study. Morality had nothing to do with art. Here again is a problem. One remembers Plato s advice not to let our thoughts run upon women, for if we do we shall think clearly about nothing else, and one knows that to neglect this advice is to lose tranquillity of mind; but then one does not wish to be considered narrow, ascetic, or inartistic, nor to lose artistic pleasures which those around us esteem so highly.
Again, the newspapers last year printed proposals to construct a Wagner Opera House, to cost if I recollect rightly,; 100,000 about as much as a hundred labourers may earn by fifteen or twenty years hard work. The writers thought it would be a good thing if such an Opera House were erected and endowed. But I had a talk lately with a man who, till his health failed him, had worked as a builder in London. He told me that when he was younger he had been very fond of theatre-going, but, later, when he thought things over and considered that in almost every number of his weekly paper he read of cases of people whose death was hastened by lack of good food, he felt it was not right that so much labour should be spent on theatres. In reply to this view, it is urged that food for the mind is as important as food for the body.
The labouring classes work to produce food and necessaries for themselves and for the cultured, while some of the cultured classes produce plays and operas. It is a division of labour. But this again invites the rejoinder that, sure enough, the labourers produce food for themselves and also food that the cultured class accept and consume, but that the artists seem too often to produce their spiritual food for the cultured only at any rate that a singularly small share seems to reach the country labourers who work to supply the bodily food!
Even were the "division of labour" shown to be a fair one, the " division of products " seems remarkably one-sided. Once again: how is it that often when a new work is produced, neither the critics, the artists, the publishers, nor the public, seem to know whether it is valuable or worth less? Some of the most famous books in English literature could hardly find a publisher, or were savagely derided by leading critics; while other works once acclaimed as masterpieces are now laughed at or utterly forgotten.
A play that nobody now reads was once passed off as a newly-discovered masterpiece of Shakespeare and was produced at a leading London theatre. Are the critics playing blind-man s buff? Are they relying on each other? Is each following his own whim and fancy? Or do they possess a criterion which they never reveal to those outside the profession ?
the book details : Download 10.5 MB