Wesblock, the autobiography of an automaton 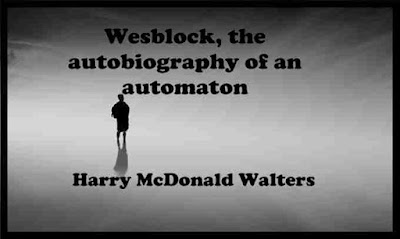 This work is in the form of a book. Outwardly a book, it is not a book in the ordinary sense. It is only an artless yarn. Wesblock is a common type, and he writes himself down as he knows himself or thinks he knows himself. His tale is not thrilling, except in so far as the understanding reader can see that he escaped being one of the great armies of the unfit by a very narrow margin. Wesblock has in fact written as much for himself as for you.
His story is an attempt to take stock of himself and to discover whether life as he has experienced it is really worthwhile. If the book helps one poor soul to find what Wesblock found — that it is really worthwhile — it will have fulfilled its mission. What he has said of persons and things only expresses his own opinions.
They may not appear true to you; but they were true to him according to his light. He preaches sometimes; but not at you — at himself. You may know more about Wesblock and his kind than he does, if so you can make a great book from this yarn by adding what you think necessary and rejecting what you know to be incorrect.
Whatever impression the story of Wesblock makes upon you is the impression intended to be made. The great failure of Wesblock' s life was brought about by many causes, the first of them far back in the beginning of things.
He learned to think and know too late to be of much use to himself or his immediate family, and this he tells you in his own way. You may know some of the people to whom he refers, and you may think he is not fair in some of his characterisations.
He is, however, just as fair to others as he is to himself. Finally, it may be as well to warn the reader that this is a story without a plot and without a hero.
the book details : Download 7 MB