Ukraine, the land and its people

an introduction to its geography 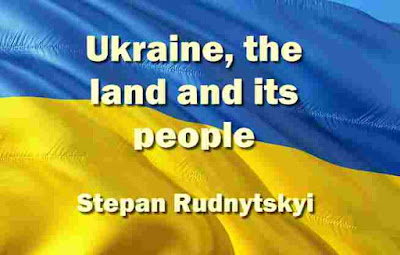 The first appearance of this book, which is from the pen of Stephen Rudnitsky, the famous geographer of the University of Lemberg, was in the Russian Ukraine. The book was printed in Ukrainian, at Kieff, and the date under the publisher's imprint was 1910. The first translation into a foreign language was into German.
This translation appeared in Vienna in 1915, with many improvements and additions. The English translation which appears in this volume is an authorized translation of the German edition above-mentioned.
The reader is respectfully requested to note that the few unpleasant references to Russia are of course meant to apply to the Russia of the Czars, as the book was written during the Czarist
There are few lands upon the whole globe so imperfectly known to geographic science as the one which we shall try to describe in this little work.
The geographic concept of Ukraine does not exist in the geography of today. Even the name has been almost forgotten in Europe in the course of the last century and a half. Only occasionally on some maps of Eastern Europe, the name "Ukraine" shows timidly along the middle of the Dnieper. And yet it is an old name of the country, originating in the 11th Century, generally known throughout Europe from the 16th to the end of the 18th century, and then, after the abrogation of the autonomy of the second Ukrainian state, gradually fallen into oblivion.
The Russian Government has determined to erase the old name of the land and the nation from the map of Europe. Little Russia, West Russia, South Russia, New Russia, were officially introduced in place of the old name Ukraine, the Austrian part of Ukraine receiving the name of East Galicia.
The people were named Little Russians, South Russians, Ruthenians, and all remembrance of the old name seemed to have been blotted out. But, in the speech of the people and in the magnificent unwritten popular literature of the nation, the name of the land could not be destroyed, and, with the unexpected rise of Ukrainian literature, culture, and a feeling of national political independence in the 19th Century, the name Ukraine came into its own again. Today there is not an intelligent patriotic Ukrainian who would use another name for his country