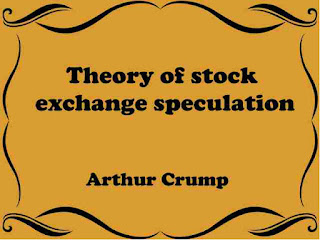 Some years ago I came across a book, called " Crump's Theory of Stock Speculation," which had gone through several editions in England; and the practical wisdom expressed therein impressed me so forcibly that ever since then I formed the project of publishing an American edition. The reader may be astonished that, as a broker, I desire to give such a book a larger circulation than it possessed heretofore, as the natural conclusion would be that it might injure my business.
I feel, however, that it is not so, and think that a broker loses nothing by doing his duty in warning* his clients against danger, and showing them the pitfalls. I do not quite agree with the author of the 'book on every point, especially when he seeks to convey the impression that it would seem almost impossible that any profit could be derived from Stock Exchange speculation.
During my long experience, I have seen many speculators accumulate large fortunes, and I believe that when speculation is conducted by a clear-headed man, as a matter of business and not as a matter of amusement, it offers great chances. Where the strength of Mr Crump's work lies is in his showing what attributes of character a man must possess to be successful, and with these attributes, a man must prove successful in stock speculation as well as in any other business. Condensed, these at- tributes are: first, a clear head; second, capital; and third, patience.
I do not agree with Mr Crump, that a speculator, to be successful, must be a hard-hearted, selfish man. I found it different with most of the prominent men on Wall Street. Of course, if a Gould or a Vanderbilt buys up a whole railroad, he cannot very well take many people into his confidence; but these men are not what is generally called speculators they are generals or diplomats, and they are not different in their actions from generals in warfare or diplomats in politics.
Outside of this class, I found generally, when I asked one of the prominent speculators for his opinion of the market, that he gave me his true and candid opinion of the future of the market; and the probabilities are that, if even not acting on this opinion at that very moment, his general policy was based on such a forecast of the market's condition.
The strength of the successful speculator lies in his observing the important principle set forth by Mr Crump on page 60 of his work. " Speculators never set sufficient value on the importance of avoiding a loss they think only of the profits." As it is with our money affairs when we say, " Look after the pence; the pounds will take care of themselves" so it is with speculation. Look after the losses; the profits will take care of themselves.
Never refuse a profit, is a golden motto for speculators, which unhappily few of them, in their greediness, have the courage to adopt.' The observance of this rule is the main cause of the success of the best speculators, and the non-observance is the cause of failure of even their confidential friends. Very few fortunes have been made in Wall Street at one stroke. Fortunes were made in that Preface. v. way were generally lost again in a very short time.
Most of the long, lasting, and solid fortunes were made by a gradual accumulation of profits* extending over a great many years. The beginnings of these were sometimes quite small, and, as the capital increased, larger operations were entered into.
Another cause of failure is the habit of taking larger risks than the means of speculators warrant. They naturally become nervous when they begin to see their capital dwindle away, and then begin, what is .called in Wall Street, to " chip out." Now, this is the curse of the speculator, not so much on account of the loss, as on account of the demoralization it will lead him into.
Of course, big losses ought to be avoided, but at the same time well based and matured operations may sometimes be temporarily upset by a temporary manipulation of the market, or by some accidents which however right themselves in a few days, and cannot seriously interrupt the natural course of the market. In such a market a nervous speculator may " chip out " a fortune, and still be right in his views as to general conditions. I think it is better to make one loss of 5 per cent, or so when you know you are wrong than to make three or five losses of 1 per cent, each when you do.
In speaking of taking profits, the question arises, what is a profit? Some people might say a profit is ' 2 per cent., and others 10 per cent. Now, of course, it is impossible to give an exact answer to this question. As a general rule, a transaction should not be made unless the chances of again are greater than the chances of a loss, but there may occasionally occur when it would be advisable to take a small profit.
All depends on the condition and temper of the market; but one rule I found to work well, aud would recommend to every speculator, namely, that at the moment when a doubt arises in your mind, and you b^gin to ask yourself whether you ought to take your profit or not, then do not lose one moment's time, but take your profit, because you can never make a very serious mistake by doing so, while you might possibly make a very serious one by refusing it. ,

7. Activity among Buyers .... 39
8. The Bull Speculator's Great Chance .... 39
9. The great importance of being now and again all together
Clear of the Markets -4
10. The Movement of Prices near the Settlements . . 41
CHAPTER III.
The Right Temperament for a Professional Speculator.
\. Cool-headedness an indispensable Condition of Success. 43
2. The Uselessness of Haphazard Speculation ... 45
3. Accurate Foresight . . . . . < . -45
4. The Cool Man, or Professional Speculator ... 46
5. Observance of the daily published Telegrams from abroad 46
6. The Selfishness and Hard-heartedness of the Professional
Speculator . . .48
7. The Non-professional or Haphazard Speculator. \ 50
8. The Misfortune of Early Gains .... -55
9. Very few Failures made Public 57
10. Greediness involves Loss. . . . 60
11. Keeping one's own Counsel. 60
CHAPTER IV. The Increase of Speculation in Stocks and Shares.
1. Stock Exchange Gambling increases in Europe, while Public Gaming-Houses are on the decline . . ..62
2. Speculation an Out-growth of prosperous times . . ' 63
3. Commercial prosperity unhealthily fostered by Illegitimate
Speculation ... 64
4. The Influence of Trade Profits upon the Stock Markets 64
5. An increase in the amount of Trade Profits realized, causes
an increase in the number of Securities . . . 65
the book details : Download Theory of stock exchange speculation