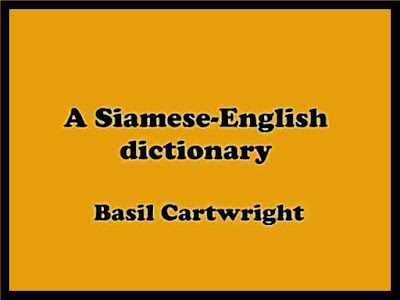 In this volume, an attempt has been made to produce a handy Siamese English Dictionary at a moderate price. Hitherto only two Siamese English Dictionaries have been published; namely the large work of Bishop Pallegoix, and the smaller one of Michell, the latter has now been out of print for a considerable time.
The present work differs from both of the above in the following particulars:—
The arrangement of the words. In the monumental work of Bishop Pallegoix, the arrangement is a purely artificial one, depending on the pronunciation of the words according to French ideas, and hence is quite un- suitable for Siamese students. In the smaller work of Michell, the arrangement is improved but is still faulty according to the Siamese method as Michell has treated the Siamese vowels as being of equal rank with the consonants.
In the present work, the natural Siamese order has been followed which will be explained later. B. The scope and compass of the work- While not possessing the wealth of detail of Pallegoix; the compass of the present work is considerably greater than that of Michell's.

Pronunciation equivalents in Roman characters have not been given for the following reasons :
(i.) That as the work is primarily intended for Siamese students; pronunciation equivalents would have been superfluous, (ii.) That it is quite impossible to give an accurate Romanization of Siamese that would be intelligible to Europeans of different nationalities.
There are of course several methods of Romaniziug Siamese in vogue, but they are all without exception deplorable makeshifts.
The parts of speech (in the English translation) have been indicated for the convenience of Siamese students in using the English words. E. Derivations, in the majority of cases have not been given, for the reason that much doubt exists in the matter, especially in the cases of the loan- words of Indian origin, as to whether a word has come directly from the Sanscrit or from the Pali, or whether the word originally Sanscrit, has been •modified by transition through the Pali. The source of directly incorporated words of Chinese, Malay, or languages other than Pali and Sanscrit, has however been indicated.
As the literature of Siatij has been by no means worked out, the translation given in the case of some of the rarer words, may ^not always be quite appropriate to a given passage.
It is much to be regretted, first, that a few errata have crept in, which it is hoped will give rise to no confusion. The more important errors have been given on a separate page. Secondly, a certain number of words under the first few letters were inadvertently omitted from the body of the work. These words will, however, be found as a supplement at the end of the book. Thirdly, in a few places, slight irregularities of arrangement occur.
Those who have never undertaken the task of compiling a Dictionary of a little known tongue can have but a faint idea of the extent of the work involved, and of the difficulties of ascertaining the exact meanings of words, especially of those in less common use. The compiler is deeply conscious of the shortcomings of this work, but trusts that in a subsequent edition (should such be called for) that many of the present defects will be eliminated.
the book details : Download 20.7 MB