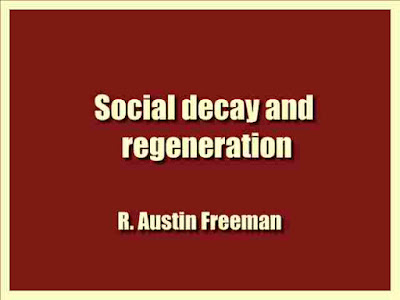 Review:
A clear, coolly reasoned discussion of why man, though he may be improved ethically, is being “civilized off” the earth physically.
The reasons given for this state are the destruction of art by machinery creating in the minds of men, “an obscure and smouldering resentment against the mechanization of work and art”; collectivism; the increasing pressure of population and the protection and survival of the unfit.
A serious but not a gloomy book
From preface:
Some fifteen years ago a brilliant young American, Gerald Stanley Lee, wrote as a sort of " Introduction to the Twentieth Century " a book called " The Voice of the Machines." It was one long paean of joy, infused with much genuine poetic feeling. Man is a machine and the creator of machines. He is turning all life into machinery; modern religion is a machine; education is a machine; government is a machine; trade is a machine; society, literature, journalism, art all are machines.
There is nothing in our modern world that we can do or have or hope to have which is not bound up with machinery. It is in machinery that we must seek for poetry and for beauty and for the Infinite. Those persons who still fail to see this are blind, even already dead; they do not belong to our time. Mr Lee's book is still worth reading. It contained a genuine element of truth that had too often been overlooked.
Yet it was not the whole truth, and where true it was not impossible to view the matter from an altogether different angle. Ever since the Industrial Revolution began, more than a century ago, there has been an obscure and smouldering resentment against the mechanization of work and life.
Among the workers, indeed, whose sound instincts may have felt more than they were able to express, the introduction of machinery, we know, led at first to open revolt and disorder. But the economists assure us that at that time industry was afflicted by decay and disease, and it was precisely the introduction of machinery which cured the disease; so those pessimistic persons who were inclined to think that, at the same time, it had killed the patient have mostly kept the opinion to themselves.
In their wildest denunciations, they have remained mild and apologetic, almost eager to give away half their case. Ruskin, who in the last century figured as the chief antagonist of machinery, was in reality scarcely an antagonist at all.
He entered, indeed, a notable general protest against the mechanization of work and of life, but when he approached details he was chiefly concerned to express his personal objection to certain by-products of the age of machinery which offended his own aesthetic feelings; he was not opposed to machinery and was even ambitious of inventing machines himself. William Morris again simply wished to return in practice to the old pre- machine stage of craftsmanship which he idealized in his Utopian "
News from Nowhere "; he made, and as an artist, it was not his concern to make, no analytic study of the tendencies of the machine age or attempt to show the way out of it, for Marxism was clearly not the way out.
The political economists, as we might expect, have been simply content to investigate things as they are, and not to criticize them; even those who possess a broad, judicial, and humane view of economics, like Professor Marshall, are tender to machinery; and Mr J. A. Hobson, who goes far in the subordination of economics to social civilization, and realizes something of the inadequacy of machine production, is mild and qualified in his condemnations and has much to say on the other side.
They all feel that the Machine Age is too sacrosanct to permit of anything but the mildest criticism of its tendencies, in a whisper, which they seem to hope no one will overhear, and even when they seem about to open their mouths to roar, it is, after all, " as gently as any sucking dove." For they have never ventured to face the actual facts, and it is even doubtful whether they have always been able to perceive them. Some twenty years ago I chanced to come across a volume of "Travels and Life in Ashanti and Jaman," presenting a fresh and vivid picture of a strong and primitive people just then being " civilized " of the earth.
The author was evidently a man of penetrating observation, of independent judgment, capable of outspoken criticism when it was required so that his name and his book remained in my memory. Therewith he passed out of my ken. But in the meanwhile, as I learn, and as indeed one might expect in a writer of so vigorous a mind, he has been active in another field, and now, with the present volume, he has again by chance come into my line of vision.
It is incomparably a more mature book than " Travels." I realize how profitably the author must have spent the intervening years. On every page one feels that he has acquired a singularly wide, varied, and precise acquaintance with the phenomena of our social life; at the same time, he shows a keen power in analyzing these phenomena as well as in demonstrating their wider bearings on the fate of mankind.
Moreover, unlike the professional political economists, he gives the impression of having learnt to approach his task, not in the study, but by a large contact with human life and affairs and by a sensitive intellectual receptivity to that contact. That is why I gladly avail myself of the opportunity to help to make this book known to those whom it may concern.
Contents:
I. Analytical: Social physiology. The social reactions of mechanism. Social pathology.--II. Synthetic