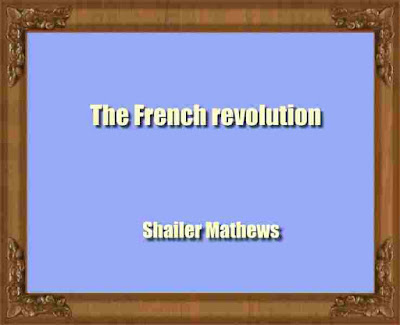 For the student of society, the few years that elapsed between the assembling of the States-General and the appearance of Napoleon Bonaparte afford material altogether unequalled for a study in social - psychology!
Few indeed were the political theories and proposals for social amelioration that were not then tried. Nor dares one say that these attempts of philosophers so desperately in earnest to bring in liberty and equality were altogether futile.
Because of the constructive genius of Napoleon, they had lasting and, in the main, beneficial results. But there were few of the refo^;m movements then inaugurated that were given anything like normal conditions for trial.
Revolutions are not the best means by which to bring about permanent reforms, any more than fevers are the best means of bringing about improvement in one's health, but they are not pathological.
No decaying people have vitality enough to carry through a revolt to such constitutional changes as make it worth the name of revolution. In France, just as in America a few years before, and in England in the preceding century, the revolution was the outcome of national convalescence, of a socialized conviction of injustice, and o.f a universal determination to install justice.
It was the expression of popular hatred with abuses — political, social, ecclesiastical, economic — which, if properly met and controlled, might have been turned into the more quiet ways of reform. Nor was it a product of Paris alone. It was the work of a great nation, provinces as well as the capital, and to appreciate its significance, the student must never confuse temporary mob rule with a national awakening.
It is this need of studying the spirit of the French people quite as much as their deeds, that has led to what may appear, in a book of this size, a somewhat disproportionately extended treatment of the pre-revolutionary condition of France. But [the change of temper which made the Old Regime unendurable and compelled Louis to summon the States-General, was by far the most important element of the Revolution.
One might properly call it the Revolution itself, so completely were the years of violence under the Convention the outcome of the attempt to preserve advantages the Constituent Assembly had gained. To understand the conditions which were outgrown and the origin and growth of the revolutionary spirit, seems, therefore, quite as necessary as to trace the history of the destruction of abuse and the struggle for liberty and rights
While novelties in the historical matter are always to be suspected, it cannot be denied that the light thrown upon the French Revolution by recent investigators compels a revision of some of the judgments of the past. Especially is this true of leading revolutionists like Dantoti and Robespierre, and quite as much so of the nature of the Terror.
As the present volume is intended for the general reader, I have not judged it necessary to give specific authorities for some of the restatements which have appeared necessary,^ but have contented myself with giving references to the chief authorities and sources at im- portant points. In addition, general references to English historical literature have been given for the benefit of those who, though not special students, may care to read somewhat widely.

PART I
I The Absolute Monarchy . . . . i
II The Privileged and Unprivileged . . 12
III Social Contrasts and Morality . . .3'
IV The Clergy and Religion ... 42
V Intellectual Emancipation through Philosophy ....... 52
PART II
THE BEGINNINGS OF THE REVOLUTION
VI The Development of the Revolutionary Spirit under Louis XV .... 73
VII The Reform Movement under Turgot and Necker ....... 91
VIII Bankruptcy and the Convocation of the States-General ..... 102
PART III
THE ATTEMPT AT CONSTITUTIONAL MONARCHY
IX The States-General and the Evolution of the
National Assembly . . . .111
X The Uprising of the Masses . . . 135
X Table of Contents
XI The End of the Old RjSgime . . . 138
XII The Reorganization of France . . 150
XIII The Progress of the Revolutionary Spirit. 166
XIV Foreign War and the End of the Monarchy 182
PART IV
THE REPUBLIC
XV The Jacobin Conquest ..... 207
XVI The Reign of Terror as a Political Experiment ....... 224
XVII The Republic under the Terror . . . 234
XVIII The Dictatorship of Robespierre . . 252
XIX The Return to Constitutional Government 266
Chronological Summary ...... 287
the book details : Download 5.4 MB