Sevenoaks; a story of today 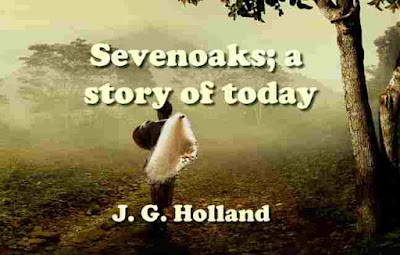 Review by Shelly
The secondary characters in this book are wonderful, particularly Miss Butterworth and Jim Fenton. I really enjoyed this book - the writing style is smooth, many of the characters are well developed, and that which makes us capable of good and bad is poignant.
Excerpt:
Everybody has seen Sevenoaks, or a hundred towns so much like it, in most particulars, that a description of any one of them would present it to the imagination a town strung upon a stream, like beads upon a thread, or charms upon a chain, Sevenoaks was richer in the chain than charms, for its abundant water-power was only partially used. It plunged, and roared, and played, and sparkled because it had not half enough to do. It leapt down three or four cataracts in passing through the village; and, as it started from living springs far northward among the woods and mountains, it never failed in its supplies. Few of the people of Sevenoaks thoughtless workers, mainly either knew or cared whence it came, or whither it went.
They knew it as " The Branch; " but Sevenoaks was so far from the trunk, down to which it sent its sap, and from which it received no direct return, that no significance was attached to its name. But it roared all day, and roared all night, summer and winter alike, and the sound became a part of the atmosphere. I 2 Sevejioaks. Resonance was one of the qualities of the oxygen which the people breathed so that if at any midnight moment, the roar had been suddenly hushed, they would have walked with a start and a sense of suffocation, and leapt from their beds.
Among the charms that dangled from this liquid chain depending from the vest of a landscape which ended in a ruffle of woods toward the north, overtopped by the head of a mountain was a huge factory that had been added to from time to time, as necessity demanded, un- til it had become an imposing and not uncomely pile. Below this were two or three dilapidated sawmills, a gristmill in daily use, and a fulling mill a remnant of the old times when homespun went its pilgrimage to town to be fulled, coloured and dressed from all the sparsely- settled country around.
the book details : Download 14 MB