The art of scientific investigation 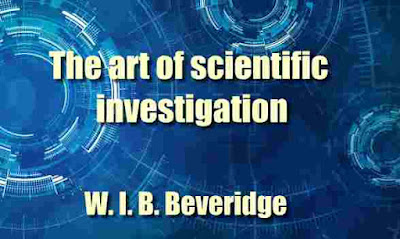 From Introduction:
Elaborate apparatus plays an important part in the science of today, but I sometimes wonder if we are not inclined to forget that the most important instrument in research must always be the mind of man. It is true that much time and effort is devoted to training and equipping the scientist's mind, but little attention is paid to the technicalities of making the best use of it.
There is no satisfactory book that systematises the knowledge available on the practice and mental skills — the art — of scientific investigation.
This lack has prompted me to write a book to serve as an introduction to research. My small contribution to the literature of a complex and difficult topic is meant in the first place for the student about to engage in research, but I hope that it may also interest a wider audience. Since my own experience of research has been acquired in the study of infectious diseases, I have written primarily for the student of that field. But nearly all the book is equally applicable to any other branch of experimental biology and much of it to any branch of science.
I have endeavoured to analyse the methods by which discoveries have been made and to synthesise some generalisations from the views of successful scientists, and also to include certain other information that may be of use and interest to the young scientist. In order to work this material into a concise, easily understandable treatise, I have adopted in some places a frankly didactic attitude and I may have over-simplified some of the issues. Nothing, however, could be further from my intentions than to be dogmatic.
I have tried to deduce and state simply as many guiding principles of research as possible, so that the student may have some specific opinions laid before him. The reader is not urged to accept my views, but rather to look upon them as suggestions for his consideration. Research is one of those highly complex and subtle activities that usually remain quite unformulated in the minds of those who practise them. This is probably why most scientists think that it is not possible to give any formal instruction in how to do research.
Admittedly, training in research must be largely self-training, preferably with the guidance of an experienced scientist in the handling of the actual investigation. Nevertheless, I believe that some lessons and general principles can be learnt from the experience of others.
As the old adage goes, " the wise man learns from the experience of others, the fool only from his own." Any training, of course, involves much more than merely being "told how". Practice is required for one to learn to put the precepts into effect and to develop a habit of using them, but it is some help to be told what are the skills one should acquire.
Too often I have been able to do Httle more than indicate the difficulties likely to be met — difficulties which we all have to face and overcome as best we can when the occasion arises. Yet merely to be forewarned is often a help. Scientific research, which is simply the search for new knowledge, appeals especially to people who are individualists and their methods vary from one person to another. A policy followed by one scientist may not be suitable for another, and different methods are required in different branches of science.

Preface viii
I. Preparation
Study I
Setting about the Problem 8
II. Experimentation
Biological experiments 13
Planning and assessing experiments 19
Misleading experiments 23
III. Change
Illustrations 27
Role of chance in discoveries 31
Recognising chance opportunities 34
Exploiting opportunities 37
IV. Hypothesis
Illustrations 41
Use of hypothesis in research 46
Precautions in the use of hypothesis 48
V. Imagination
Productive thinking 53
False trails 58
Curiosity as an incentive to think 61
Discussion as a stimulus to the mind 63
Conditioned thinking 64
VI. Intuition
Definitions and illustrations 68
Psychology of intuition 73
The technique of seeking and capturing intuitions 76
Scientific taste 78
VII. Reason
Limitations and hazards 82
Some safeguards in the use of reason in research 86
The role of reason in research 92
VIII. Observation
Illustrations 96
Some general principles in observation 98
Scientific observation 102
IX. Difficulties
Mental resistance to new ideas 106
Opposition to discoveries 1 1 1
Errors of interpretation 1 1 5
X. Strategy
Planning and organising research 121
Different types of research 126
The transfer method in research 129
Tactics 131
XI. Scientists
Attributes required for research 1 39
Incentives and rewards 142
The ethics of research 145
Different types of scientific minds 148
the book details :