Lectures on the history of Roman religion from Numa to Augustus 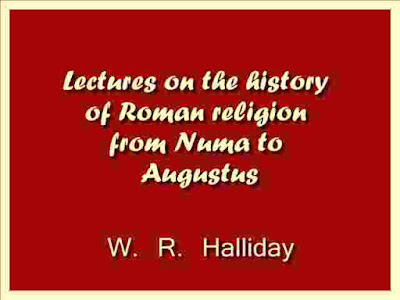 This little book does not aim at making any original contribution to knowledge. It has been written out from the notes of a course of lectures, which were actually delivered as public lectures in our Institute of Archaeology, but were primarily designed for students in the first or second year of study in the Honours School of Classics in Liverpool University.
Their aim was to summarise very briefly the character and the historical development of Roman religion up to the death of Augustus. It had been intended that the story should be completed by a similar course upon the conflict of religions under the Roman Empire to be given by my friend and colleague, Mr H. A. Ormerod. Unforeseen contingencies have caused what I hope may be only a post- ponement.
These circumstances may be allowed to explain the meagre treatment here allotted to the introduction of Oriental cults and to the antecedents of Emperor worship, for these topics belong essentially to this second chapter in the history of Rome. I have very strictly limited my references both to original authorities and to specialist works. So short a survey cannot aim at more than being an introduction to larger works of a general character in which further references will be found. I have borrowed freely from all the books mentioned below, and most extensively from Warde Fowler's Religious Experience of the Roman People, a book which is as delightful as it is profitable to read again and again.
It is impossible in the effort to be concise to avoid occasional overstatement and sometimes I may have represented as fact what is the disputable hypothesis. I have tried, however, to be orthodox rather than original, and I hope that in the main these lectures represent sound doctrine. Two excellent small books on Roman religion exist in English, though one if not both are out of print. The late Mr J. B. Carter's Religion of Numa and other Essays covers much the same ground as these lectures; Mr Cyril Bailey's, The Religion of Ancient Rome deals with the religion of Numa.