The threshold of religion 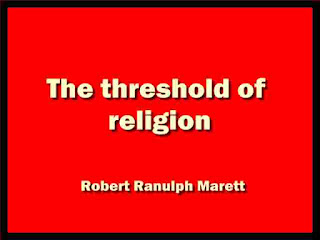 From introduction:
A self-respecting play requires no prologue, and it would, perhaps, be a better policy on my part to ring up the curtain without more ado on these short studies in Comparative Religion. Yet it seems only fair when old work is about to be given a new lease of life, that the author should state whether he still abides by what he has written.
The papers here brought together to bear one and all on the same general topic, namely, the nature of the experience involved in rudimentary religion. Again, all of them alike illustrate the same general thesis, namely, that much of what has hitherto been classed as magic so far as it has been noticed at all is really a religion of an elementary kind.
In the earliest essay of the series I termed this so-called " magical " element, and the type of religion in which it prevails, " pre-animistic." The epithet has gained some currency; nay, the substantive expression " pre-animism " has been coined and brought into use, though not by me. Now, so long as we are at one about the facts, the words may take their chance. But I am as much concerned today as I was fourteen years ago l to urge students of Comparative Religion not to stop short at animism, but to dig deeper into human nature in their search for the roots of religion.
Other writers have since independently upheld the same contention, developing it with far greater thoroughness and skill. In fact, I believe that most anthropologists of repute would nowadays subscribe to the negative proposition that animism will not suffice as " a minimum definition of religion." More than that, there would seem to be wide agreement also regarding a positive doctrine implicated therewith.
According to this doctrine, so-called " magical," that is to say, more or less impersonal forces and qualities may and do possess, not secondarily and by derivation, but primarily and in their own right, religious value in the eyes of the man of rudimentary culture; and even tend to possess such value in a predominant degree.
This positive doctrine, which is sometimes known as "the pre-animistic theory," needs, of course, to be developed carefully and critically in the light of the evidence which, while it constantly accumulates, must ever remain incomplete. No anthropological theory can afford to stand still, least of all one that seeks to be extremely comprehensive.