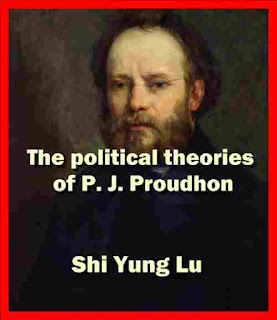 Proudhon's published works fill thirty-six volumes and his correspondence brings the total up to fifty volumes.
In view of the dearth of studies of Proudhon in the English language, the author has tried to analyze chronologically and to explain rather extensively the development of his philosophical thought in general and his political thought in particular, indicating modifications and contradictions.
The author wishes to acknowledge his profound indebtedness to his friends, Mr King Chu and Mr H. C. Wang, for their constant advice, to Professor William A. Dunning, Professor Howard Lee McBain, Professor Carlton J. H. Hayes and Professor Franklin Henry Giddings, from whose works and lectures he obtained much valuable assistance; but especially to Professor William A. Dunning and Professor Carlton J. H. Hayes, under whose inspiring direction this work was conducted.

Historical Background.
(1) The Economic Background 8
(a) Agriculture 9
(b) Industry „ 12
(c) Commerce 16
(2) The Social Background 17
(a) The decline of the old privileged orders :
(x) The nobility
(y) The clergy
(b) The growth of the middle and lower classes:
(x) The peasantry 19
(y) The bourgeoisie — 19
(z) The proletariat 21
(3) The Political Background 24
(a) The Revolution
(b) The First Empire
(c) The Restoration
(d) The July Monarchy
(e) The Second Republic
(f ) The Second Empire
(4) The Philosophical Background 27
(a) The revolutionary school — Rosseau 28
(b) The traditionalist school — Chateaubriand, De Maistre, De
Bonald and Lamennais 29
(c) The socialists — St. Simon. Fourier, Cabet and Louis
Blanc 31
CHAPTER II
Proudhon's Life.
(1) The period of boyhood and youth (1809-1836) 39
(2) The period of mature intellectual activity p837-186S) 40
(a) Proudhon as an anarchist (1840-186^ 41
(b) Proudhon as a federalist (1862-186Sf. 49
vi The Political Theories of P. J. Proudhon
CHAPTER III
^' Proudhon's General Philosophical Ideas
Face
(1) The supremacy of economics over politics 50
(2) Progress 51
(3) Liberty 52
(4) Equality 55
(5) Justice 61
CHAPTER IV
Proudhon's theory of the state from the standpoint of an anarchist-
descriptive,
(1) Origin of the State 65
(a) The family 65
(b) The tribe 65
(c) The city 66
(d) The state 66
(2) Definition of state and of government 66
(3) Development of the state 68
(a) The development of its ideas 68
(x) The idea of necessity 68
(y) The idea of providence 71
(z) The idea of justice 73
(2) The development of its forms 75
(x) The old regime — monarchy, aristocracy and
democracy 75
(y) The new regime — anarchy 77
CHAPTER V
Proudhon's Theory of the State from the Standpoint of an Anarchist —
Critical.
(1) As to state and government in general 78
(2) As to the different forms of government 81
(a) His criticism of absolute monarchy 85
(b) His criticism of representative government 85
(x) His criticism of constitutional monarchy 87
(y) His criticism of democracy or direct government
in its moderate form 88
(z) His criticism of the direct government in its radical form 90
(3) As to the institutions of the state 90
(a) His criticism of law 90
(b) His criticism of the judiciary 91
(c) His criticism of taxation 93
(d) His criticism of public functionaries 93
the book details :
Pierre-Joseph Proudhon was a French socialist, politician, philosopher, economist and the founder of mutualist philosophy. He was the first person to declare himself an anarchist, using that term, and is widely regarded as one of anarchism's most influential theorists.
Download 3.5 MB