Population and the social system 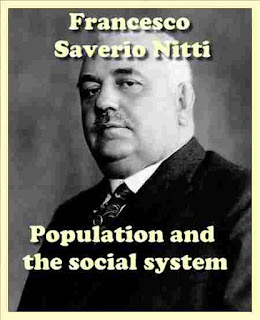 Excerpt from the introduction:
My dear friend, Do you remember Hobbes' immortal aphorism? When reason is against a man, then man is an enemy of reason. To become convinced of the profound truth contained in this saying of Hobbes, it would be sufficient to examine the historical causes of economic theories, to make up, as you have once said, the economic theory of economic writers.
If our science has made and still makes so Httle progress, it is because it is concerned with vital and real interests; to accept one of two directions is not for us, as for the followers of other sciences, merely a question of method, but it means, moreover, that different and opposite conclusions are reached, and that fixed forms of social organisation are justified -or condemned. Had the propositions of Euclid affected economic interests, they would not now rank among the definite conquests of science, but would still appear doubtful hypotheses of arduous solution.
\
Metaphysics, driven out of all the other sciences, have taken refuge in ovirs, and I daily ask myself what can be the purpose of so many and such useless and vain researches, grounded upon pure hypotheses. They are very few among the studious who follow a masterly road; just as there are but very few who do not sacrifice objective research to class interests.
We have a philosophy of wealth and philosophy of poverty; what we really lack is a broad and impartial philosophy. On the one side, there are those who can see nothing but the o miseries of the present hour, and there are those who would wish to change everything. Grethe had a motto to see all the sides of things.
On the contrary, what is now wanted is just this exalted and serene vision, this calm, objective character in research and examination. During the reign of Frederic II., Sommering, the anatomist, in an inaugural dissertation at the University of v! Dedication. Mayence, foreseeing a great scientific truth, maintained that the anatomical conformation of negroes in their savage state approximated much more to monkeys than to white men.
The canons of Mayence, who preserve the relics of the three Magi, one of whom, Melchior, would seem to have been a negro, were scandalised at this, and protested so vehemently that the honest Sommering was severely blamed and punished.
The teaching of the Darwinian hypotheses is now permitted in the Universities; but if an economist dares to sustain that some economic maxims held sacred hitherto are without any real foundation, or that, like the good Melchior, some economists belong much more to some inferior species of thinkers than to a superior one, he can be certain that he will be anathematised by the canons of our science. Love, favour, and sympathy are bestowed only upon extreme theories, which gratify the interests of one class or another.
On the one hand, quite a host of economists support no hypothesis that does not imply fatality, necessity, and immutability; on the other hand, a herd of authors flatter the passions of the populace, making themselves the apostles of views that necessitated immediate changes and profound convulsions.
Both classes are outside of the right way and have abandoned the great channel of objective research. I am of the number of those who recognise the full moral and economic importance of modern socialism; to me, it seems a great and beneficent reaction of optimism against blind and baneful pessimism, which had penetrated both the souls and minds of men.
Hence I have studied socialistic literature with great affection for many years. And though greatly admiring the spirit which animates it, I am necessarily convinced that, after the book of Marx, so defective and yet so great, collectivism has been unable to produce a true and deep work.
This is because both revolutionary and conservative collectivism is chiefly theories of an occasion, each destined to safeguard the interests of a different class; and if the former be inspired by broader and better intentions, it also proceeds through a stormy sea of error and illusion. I do not know if the historic conception of Saint Simon Dedication. vii appears large-minded to you as it does to me. And although I accept it in part,
I am at least convinced that there are organic and critical periods in human history. During organic periods humanity accepts with profound conviction systems of positive belief more or less true or useful. Under the influence of these beliefs, men make all the progress of which the theories are capable, and then at last they come to find themselves in difficulty.
Then succeeds a period of negation and criticism, during which mankind loses its former convictions, without acquiring other authoritative ones, except that of judging the former theories to be erroneous. And this is a view which has much truth in it, and which completes that materialistic conception of history which has gained so great a progress during recent years, and that, chiefly, thanks to your endeavours. And now we are truly in a critical period, and the society of our day is, as Dante would say, entomata in difetto, from which, if the angelica Farfalla dreamed of by Utopian reformers does not issue, at least there should issue something better and healthier than our present state.
the book details : Download Population and the social system -11.5 MB