The religious teaching of the Old Testament 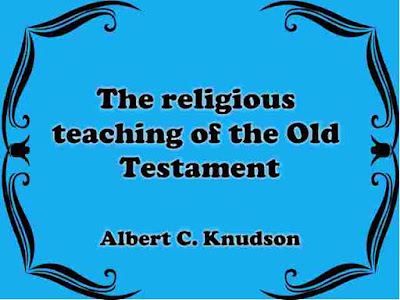 From Preface:
In this exposition of the religious teaching of the Old Testament, I have adopted the topical method as best calculated to meet the needs of the preacher and general Bible student. This method presupposes some acquaintance with the religious history of Israel taken as a whole.
The first chapter is consequently devoted to a brief outline of the development of Old Testament religion and literature. The aim of the book is to give an account of the origin and development of the leading religious ideas of the Old Testament. Incidentally, the effort has been made to relate these ideas to modern thought.
Controverted questions have been made subordinate, but it has not been possible to avoid them altogether. Scholars are generally agreed on the history of religious thought in Israel after the time of Jeremiah and Ezekiel. But with reference to earlier times, especially the preprophetic period, considerable difference of opinion still prevails.
It is the contention of this book that the literary prophets were not, in the proper sense of the term, the "creators of ethical monotheism." The higher faith of Israel may be traced back to the preprophetic period. Indeed, its germ is to be found in the teaching of Moses. As regards two points in particular the history of the Messianic hope and the place of the individual in early Israel the view held by many modern scholars is in need of revision.
To these subjects consequently, special attention has been given. The traditional form of the divine name "Jehovah" is the one still in general use. But the more correct form, Yah we (h) or Jahve(h), is almost universally employed among scholars (see pages 54f.), and it is only a question of time when it will come into general use.
Hence I have adopted it, though not without some hesitancy, in all cases except in the biblical quotations, where I have followed the text of the American Revised Version. My special thanks are due to the Rev. Elmer A. Leslie, PhD, for the painstaking care with which he has gone through the manuscript, verifying references and making numerous helpful suggestions and criticisms.
I wish also to thank Professor Edgar S. Brightman, PhD, for the privilege of using the advance sheets of his valuable work on the Sources of the Hexateuch.
The Bible text used in this volume is taken from the American Standard Edition of the Revised Bible, copyright, 1901, by Thomas Nelson & Sons, and is used by permission.
the book details : Download 14.2 MB