The adventures of a modern occultist 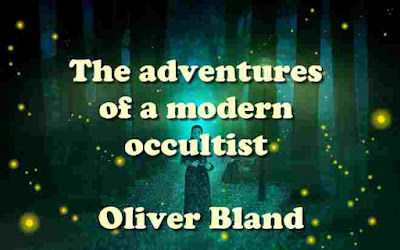 From introduction:
The individual who deals with the by-paths and mysteries of that great Science which we term loosely Occultism, courts neither personal notoriety nor publicity for the strange proceedings in which he plays a part. I have always been an energetic student of psychic matters, drawn thereto by the possession of certain unusual gifts with which Nature has endowed me.
Throughout the history of mankind there have always been a certain number of individuals who have kept alive the sacred fire and held the secret keys of many mysteries, and from time to time an advance in general human knowledge or in an applied art or science has revealed to the vulgar some small part of the outer mysteries that have always been known to the initiates.
These disclosures are hailed as discoveries and set in their ordered place in the catalogue of human knowledge.) There are in this book certain disclosures of hidden facts that are given to the world simply because the time is ripe when they should be more fully known and their revelation is counselled by wisdom. Human nature has always suffered from its lack of discrimination between Prophets and False Prophets, and one of the greatest difficulties that beset the Occultist is to know what is safe to reveal. It is for this reason that secrets are hidden from the vulgar and the charlatan, fpr these things must be hidden lest they are turned to base ends.
The revival of deep public interest in psychic matters is only a matter of time, and then those things which have been of absorbing interest to the few will become of vital interest to the many. The following chapters are simply transcripts of some of the astoundingly interesting matters which have been reposted for years in my diaries and notebooks.
They have been set out in conventional narrative form with no great changes except of names and places and the elimination of the rather involved scientific terminology of the psychologist and the laboratory.
In these days when men are turning from the crude materialism of the nineteenth century and the true scientist is the last person to deny the realities which were deemed mythical a few short years ago, they may serve to fill a certain need. An interest in Occultism is common to most people, but a deep study of its principles and its phenomena is attainable only by the few.
It is not advisable to seek transcendental experiences without a sound working knowledge of the root- springs of these phenomena, and one of the purposes of this volume is to render invaluable assistance to those who possess psychic gifts to a greater or lesser degree.
The Spiritualist, the Theosophist, and the student of Psychic Research will all find in these pages much to interest them and much to ponder. It throws light in some of the dark places which have seemed obscure to those of the modern schools of thought who have not studied ancient knowledge.