The evolution of modern liberty 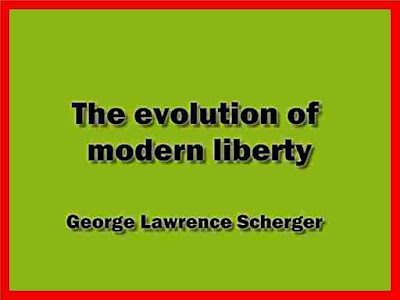 The study of political theories seems to be attracting considerable attention at present, a number of able writers, such as Dunning, Willoughby, Merriam; Os- good, and others have recently made contributions to this branch of research. Political theories are not only of theoretical interest but have at times greatly influenced historical development.
This is true in a marked degree of those ideas whose genesis is traced in the following pages. They have been put forward repeatedly as a protest against oppression and arbitrary power. Their greatest influence, however, has made itself felt since the American Revolution.
They have in large measure contributed to making our American political institutions what they are today. They are often spoken of as American principles. Though they did not originate in this country, they were here for the first time incorporated in the political programme of a great nation, and have been more completely realized here than in any other country.
The following dissertation was begun at the suggestion of Professor Max Lenz of the University of Berlin. It was originally my intention to limit my study to a consideration of the relation between the principles of the French Revolution as expressed in the Declaration of the Rights of Man and of the Citizen, and the principles of the American Revolution, as expressed in the State papers of that time, especially in the Bills of Rights of the individual States.
The recent monograph of Professor Jellinek of Heidelberg, entitled Die Erkld- rung der Menschen- und Burgerrechte, translated into English by Professor Farrand, does not seem to me to be entirely satisfactory. Jellinek conveys the impression that the French Declaration of the Rights of Man is a literal transcription of clauses contained in the Bill of Rights of the American States. He fails to show how the French people became acquainted with the principles contained in the American Bill of Rights. He does not consider the discussions that took place in the Constituent Assembly on the Declaration of the Rights of Man.
The very fact that these discussions lasted longer than a month and that more than a score of drafts were considered, proves, it seems to me, that a literal transcription of the Bills of Rights is out of the question. In tracing the genesis of the American Bill of Rights, Jellinek overrates the influence of the struggle for religious toleration and undervalues the influence of the theory of Natural Law.
Though differing from Professor Jellinek on many points, I do not agree with the view taken by E. Boutmy of the French Institute, who fiercely attacks JeUinek in an article to be found in the Annates des Sciences Politiques of the 15th of July, 1902, in which he argues against any American influence whatever, attributing the origin of the Declaration to Rousseau's influence, and considering that document to be an exclusively French production.
Though acknowledging the fact that the people of France, yes, of all the civilized countries of Europe, were well acquainted with the political principles in question before the American Revolution occurred, it seems to me that the American people first proclaimed them in the form of a Declaration of Rights. The idea of a Declaration of the Rights of Man is specifically American.
There is no trace of such an idea in Rousseau or any other French writer. Indeed, though the political theories the Declaration of the Rights of Man announces are to be found in Rousseau's writings, the idea of drawing up a declaration of individual rights with which the State shall not interfere is hostile to the entire course of Rousseau's reasoning.
The members of the Constituent Assembly in discussing the principles of the Declaration constantly speak of American precedent and refer to the idea of such a declaration as coming from the New World. It was because the well-known theories of the liberal writers seemed to have been triumphantly carried out in America, that the influence of the American Revolution upon Europe was so great. The identical principles embodied in a political programme or declaration according to the manner of the Americans are prefixed to the first French constitution.
They were now scattered broadcast throughout Europe, and have contributed more than anything else to the transformation of society and of government along the lines of democracy and individual liberty. It has been my purpose to trace the genesis and development of the political theories embodied in the Bills of Rights and in the French Declaration of the Rights of Man and to show that these documents are the results of a long development. I have confined myself to the historical treatment of the subject. For critical discussions, I refer to Ritchie, Natural Rights; Willoughby,
The Nature of the State; Lyman Abbott, The Rights of Man; Tiedemann, The Unwritten Constitution of the United States; Blum, La Declaration Des  Droits de V Homme et du Citoyen, and to Bertrand's book on the same subject. Thanks are due to Professor Max Lenz of the University of Berlin; to Professors J. W. Jenks and G. L. Burr of Cornell University; to Professor H. Morse Stephens of California University; and to President F. W. Gunsaulus of the Armour Institute of Technology, for suggestions and assistance in the preparation of this monograph.

Introduction.--pt. 1. The history and development of natural law.--pt. 11. History of the doctrine of the sovereignty of the people.--pt. 111. The American bills of rights.--pt. 1V. The French declaration of the rights of man and of the citizen
the book details : Download  5.7 MB