The mind and its education 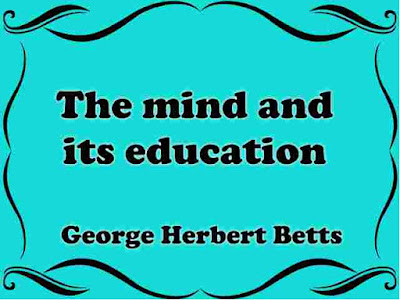 This book is intended as an introduction to psychology for teachers, both in their private study and their Reading Circle classes, for students in secondary schools, normal schools or colleges, and for general readers.
Its appearance is an immediate outgrowth of various courses of lectures on psychology and education given to classes of teachers and elementary students in education. More remotely, it owes its origin to a suggestion received from Prof. John Dewey when the writer was a student in his classes. Said, Professor Dewey: "The teacher is equally under the necessity of knowing each of the two factors in the educational process culture and the child; that is, subject-matter and psychology not the technicalities and controversial points of psychology, but its broad and fundamental truths, upon which practically all are agreed, and which, fortunately, are simple and easily understood."
This statement furnishes the standpoint, in the following pages, for both subject matter and method of treatment. First, the attempt has been made to present only fundamental truths, which, let us be thankful, is but little subject to controversy.
No space has been devoted to the controversial, speculative, or hypothetical questions which are vexing the soul of the advanced student of psychology. Considerable emphasis has been placed on the physiological processes which accompany our mental life, but always for the purpose of throwing light on our mental processes and without losing sight of the fact that the discussion has to do primarily with psychology rather than with physiology.
Second, the aim has been to state these fundamental truths simply, that the student may clearly understand them; and also to state them attractively, that he may cultivate the desire for reading them. These two considerations have had much to do with determining the style and method of treatment. The more popular, if less literary, lecture-style has been used in preference to the essay style. This was done because of the eagerness with which young students, who are afraid of the average work on psychology, will seize upon the very same subject matter when it is stripped of all unnecessary abstruseness, and presented with a sufficient amount of illustration to clothe the skeleton of dry facts with something of vitality.
Third, it is recognized that if the student is really to make use of the psychology he learns, he must have practical and useful truths presented to him, and must be led to a comprehension of these truths through their relation to his own actual experience.
This criterion dictates that the subject matter presented shall be of such a nature that its counterpart can be found in the experience of the student, and discovered by him through the process of introspection; that the psychological truths and laws discovered must find application in acquiring new experience that is, in Education; that the psychology must be applied, or better, it must be studied with the individual student himself as to its centre and subject so that the application is never separated from the process of its discovery.
The foregoing views account for the fact that the text is much more descriptive than explanatory; that a constant appeal is made to the experience of the student to verify the statements of the text; that the matter presented is so largely concrete and so little abstract; that the application of psychological truths and laws is continually made to development and education.
The various exercises suggested at the ends of the chapters will be found useful not because they outline the respective chapters in any systematic way, but because they will encourage introspection, without which psychology may be committed to memory but can never become a directive factor in education. The reading references will be serviceable to the student who desires to pursue the subject beyond the scope of this book. My colleague, Prof. John E. Stout, has rendered valuable assistance in the preparation of the manuscript for this book, for which grateful acknowledgement is given.