My memoirs by Alexandre Dumas 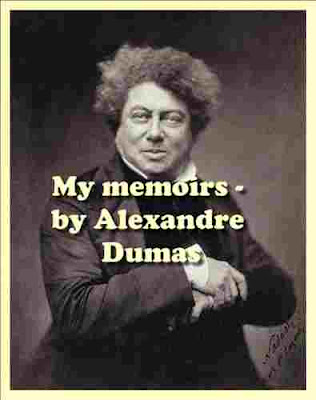 Introduction by Andrew Lang:
There is no real biography of Alexandre Dumas. Nobody has collected and sifted all his correspondence, tracked his every movement, and pursued him through newspapers and legal documents. Letters and other papers (if they have been preserved) should be as abundant in the case of Dumas as they are scanty in the case of Moliere. But they are left to the dust of unsearched offices, and it is curious that in France so little has been systematically written about her most popular if not her greatest novelist. Many treatises on one or other point in the life and work of Dumas exist, but there is nothing like Boswell's Johnson or Lockhart's Scott.
The Memories by the novelist himself cover only part of his career, Les Enfances Dumas; and they bear the same resemblance to a serious conscientious autobiography as Vingt Ans Apres bears to Mr Gardiner's History of England. They contain facts, indeed, but facts beheld through the radiant prismatic fancy of the author, who, if he had a good story to tell, dressed it up " with a cocked hat and a sword," as was the manner of an earlier novelist.
The volumes of travel, and the delightful work on Dumas's domestic menagerie, Mes Bretes, also contain personal confessions, as does the novel, Ange Pitou, with the Causeries, and other books. Fortunately, Dumas wrote most about his early life, and the early life of most people is more interesting than the records of their later years.
In its limitation to his years of youth, the Mkmoires of Dumas resembles that equally delightful book, the long autobiographical fragment by George Sand. Both may contain much Dichtung as well as Wahrheit: at least we see the youth of the great novelists as they liked to see it themselves. The Memories, with Mes B&tes, possess this advantage over most of the books, that the most crabbed critic cannot say that Dumas did not write them himself. In these works, certainly, he was unaided by Maquet or any other collaborator.
They are all his own, and the essential point of note is that they display all the humour, the goodness of heart, the overflowing joy in life, which make the charm of the novels. Here, unmixed, unadulterated, we have that essence of Dumas with which he transfigured the tame " copy " drawn up by Maquet and others under his direction. He told them where to find their historical materials, he gave them the leading ideas of the plot, told them how to block out the chapters, and then he took these chapters and infused into them his own spirit, the spirit which, in its pure shape, pervades every page of the Memoires.
They demonstrate that, while he received mechanical aid from collaborators, took from their hands the dry bones of his romances, it was he who made the dry bones live. He is now D'Artagnan, now Athos, now Gorenflot, now Chicot, — all these and many other personages are mere aspects of the immortal, the creative Alexandre. Dumas's autobiography, as far as it is presented in this colossal fragment, does not carry us into the period of his great novels (1844-1850)
The work (in how many volumes) would have been monumental: he left his " stary-pointing pyramid " incomplete, and no mortal can achieve the task which he left undone. Despite his vanity, which was genial and humorous, Alexandre Dumas could never take himself seriously. This amiable failing is a mistake everywhere if a man wants to be taken seriously by a world wherein the majority have no sense of humour. The French are more eminent in wit; their masters of humour are Rabelais, Montaigne, Moliere, Pascal, and, in modern times, Dumas, Theophile Gautier, and Charles de Bernard. Of these perhaps only two received fair re- cognition during their lives.
Dumas, of course, was not unrecognised; few men of the pen have made more noise in the world. He knew many of the most distinguished people, from Victor Hugo and Louis Philippe to Garibaldi. Dickens he might have known, but when Dickens was in Paris Dumas invited him to be at a certain spot in the midnight hour, when a mysterious carriage would convey him to someplace unnamed. Mr R. L. Stevenson would have kept tryst, Dickens did not; he could not tell what prank this eternal boy had in his mind. Being of this humour, Dumas, however eminent his associates, however great the affairs in which he was concerned, always appeared to the world rather as Mousqueton than as Porthos, a tall man of his hands, indeed, but also much of a comic character, often something of a butt. Garrulous, gay, doing all things with emphasis and a flourish, treating a revolution much in the manner of comic opera, Dumas was not un Homme serieux. In literature, it was the same. He could not help being merry; the world seemed a very jolly place to him; he never hooted, he said, at the great spectacle of the drama of Life.
the book details :
Download My memoirs - by Alexandre Dumas  - in 6 Volumes
v. 1. 1802 to 1821 -- v. 2. 1822 to 1825 -- v. 3. 1826 to 1830 -- v. 4. 1830 to 1831 -- v. 5. 1831 to 1832 -- v. 6. 1832 to 1833