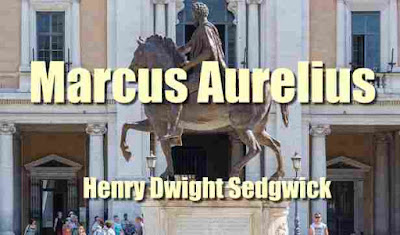 A biography told as much as may be by letters, together with some account of the Stoic religion and an exposition of the Roman government's attempt to suppress Christianity during Marcus's reign.
IN this little book my purpose is to provide those people for whom the Meditations of Marcus Aurelius contain deep religious meaning, with such introductory information about him, his character, his religion, and his life, as I think, judging from my own experience, they may de- sire. So I begin with an exposition of Stoic philosophy, and, as I believe that philosophy to have been primarily a religion,
I present it as such. And in my defence to sundry criticisms made upon Marcus by ancient and modern writers, I give by far the most space to the gravest, that he persecuted the Christians, for I think no accusation would have surprised him more, or have seemed to him more unreasonable. I have not wished to encumber the pages with notes, and therefore I have relegated to the appendix most references to
my authority for statements in the text. Such quotations in a foreign language as have not been translated in the text will be found translated in the appendix. Greek phrases that occur in the letters I have rendered in French.

I. The Founders of Stoicism.
II. Stoic Ethics under the Empire
III. Boyhood and Youth
IV. Literary Society in Rome
V. The Study of Rhetoric
VI. Letters between Friends
VII. Early Manhood.
VIII. From Rhetoric to Philosophy
IX. The Influence of Skepticism
X. Other Motives
XI. Lucius Verus and the Parthian War.
XII. Emperor Marcus at Rome
XIII. The Plague and the Barbarian War.
XIV. The Rebellion of Avidius Cassius
XV. Closing Years .....
XVI. Two Pagan Criticisms...
XVII. The Roman Attitude toward Christianity
XVIII. The Policy of the Government.
XIX. Enforcement of the Law
the book details : Download\ 10.2 MB