Manaism, a study in the psychology of religion 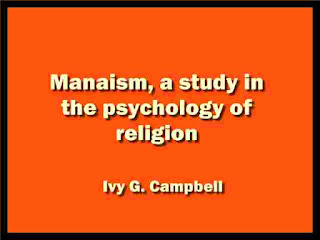 In recent years a theory has appeared which purports to describe man's first explanatory reaction to his environment. For many years it was supposed that animism was this first reaction; but this new theory, variously called animatism, dynamism, manaism, preanimism, etc., states that man first *
The writer wishes to express her thanks to President G. Stanley Hall, under whom this study was made, for advice and criticism; to Professor Mary Whiton Calkins for very helpful criticisms and suggestions; and to Dr Louis N. Wilson, Librarian of Clark University, for courtesy and kindness in making available the literature for the study explains things, not in analogy to his own soul as animism holds, but rather by postulating a great force such as mana.
The present study attempts to evaluate this claim, first by a consideration of the statements made by the upholders of the view, and second by a study of those beliefs of primitive peoples which afford the material for this contention. Not only the beliefs of primitive peoples quoted by the holders of this theory but also comparable ones from other parts of the world have been considered.
The material for this second part has, for the most part, been taken from accounts of so-called primitive religions; and although to us these accounts seem to contain a mixture of philosophy, psychology, anthropology, religion, etc., they will here be largely treated from the angle of their relation to religion.
In treating the material from this standpoint four problems seem to stand out: first, what is the nature of this mana which has been so prominent in primitive beliefs; second, is it true that manaism represents an explanatory reaction prior to animism — and if not, what is the relation of the two concepts ; third, is manaism religion; fourth, is it magic.
As the discussion centring around the theory of manaism is one of such comparatively recent dates, we have reviewed at some length both the material on which the theory has been based and the interpretations that various writers have made of this material.
The reader is thus enabled to judge the worth of the theories and of the justification of our criticisms. In presenting the compilation of material which we have gathered from reports of primitive peoples selection has been made of that gathered from parts of the world which have not previously found a large place in the literature of preanimistic discussions.
Since the data from North America and Australia have been previously extensively cited, this study, in order to uphold its contentions, stresses the data of Africa and Australasia, exclusive of Australia.
Contents:
I. Introduction
II. Nature of Manaism
a. Field-workers' reports
b. Interpretations of these reports
1. Mana as a magical power
2. Mana as an impersonal spiritual power
a. The individual in its source
b. Social in its source
3. Mana as personal spiritual power.
III. Is Mana Impersonal?
IV. Is Manaism prior to Animism?
V. Application of our Theory to Representative Primitive Data
VI. Is Manaism Religion?
VII. Is Manaism Magic?
VIII. Conclusions
IX. Bibliography
the book details : Download 3.3 MB