Lucretius and his influence 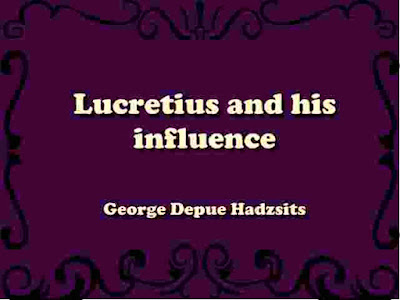 While we know the exact dates of birth and death of many of our Roman authors, those of Titus Lucretius Carus are curiously obscured. From statements, conflicting as they are, in Donatus and Jerome, who lived about four hundred years after Lucretius, it would appear that our poet was born ca. 99 b.c. and that he died forty-four years later, on the fifteenth of October, 55 B.c.’-
It is surprising that such a veil of mystery covers the life of one whose importance, as a thinker and as a poet, was so very great to the Rome of his own day. It might be difficult to discover an analogue to this strangely anomalous situation
We are, therefore, in ignorance and are likely to remain in the dark about Lucretius’ birthplace, his social status, his place of residence, his activities, political, military, or otherwise, his private life, his personal appearance.
All of this is in strange contrast with the fullness of our knowledge of Catullus, Caesar, Cicero, Virgil, Horace, or Ovid.
No external evidence exists that throws light upon any of these problems; the poem, the De Rerum Natura, has been scanned over and over again with a view to discovering some internal evidence that might be recognized as valid. But scholars have drawn diametrically opposite conclusions from the same passages, maintaining and denying that Rome was his home, affirming and denying that Lucretius was an aristocrat, claim- ing the highest moral standards for him and arguing that he was a voluptuary.
It is idle to speculate any longer, on most of these questions, until other evidence should appear. This much we know — that of Latin he was a master and that he called it his native, his ancestral 2 We should, however, not forget the likeness of the poet, appearing on a black agate, which Munro accepted as ancient and authentic.