Inspired millionaires - an interpretation of America 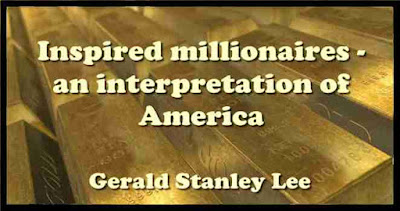 Excerpt:
It seems to be natural for all of us to be a little restless about our millionaires. They are all amateurs or nearly all of them. The very idea of millionaires — mobs of them at least — is new in the world. They do not know how to do it. There are probably very few of us who can keep, very long at a time, from trying to think things out for them a little.
The last time I had of this sort I wrote out the following: Rules for Millionaires First. Be a monopolist. Second. Get your monopoly without being mean, that is, by the invention, by some sheer overwhelming service to mankind, by saving every man on the planet several dollars a year. . Take it for granted that if you had had a chance to make the rounds oi the planet and talk to every man on it beforehand, and ask him if he would be willing, in case you saved him several dollars a year, to go halves with you on what you saved for him — take it for granted that he would say yes.
Fourth. Pocket the money. See to it that you are able to keep in absolute un- questioned control throughout the world of the thing you have thought of for it. In other words, see to it that you have an opportunity to be mean if you want to.
Fifth. Almost anyone could be mean. There have been many great inventions among men before, but no invention anyone could make would be so great to us now, or so original, that not being mean with it would not seem greater and more original. The first man with an invention in the twentieth century who will be professional with it — act like a gentleman or an artist, with it, who will dedicate

PART ONE
(Which Says They are Coming)
I Millionaires and Other People T
II Millionaires and Machines 23
III The Library Cure 26
IV Expectations 35
V Three Men to Expect 46
VI Millionaire's Turn First, Please 50
PART TWO
(Which Considers Ways and Means)
I An Arrangement for Being Allowed to Think 61
II Superintendents and Ideas 69
III Unions and Ideas 79
IV The Skilled Labor of the Poor 98
V The Skilled Labor of the Rich 106
PART THREE
(Which is Concerned With Signs and Tokens)
I The Lack of Conveniences for Millionaires . . 113
II The Millionaire Who Does Not Want to Be
Lonely 141
III The Millionaire Who Wants to Be Happy . . 146
IV The Millionaire Who is as Good as Anybody. 152
V A Million Dollars as a Profession 163
VI A Million Dollars as an Art Form:
(1) Surplus and Aristocracy 170
(2) The Millionaire and His Imagination. 174
(3) Imagination and the Higher Selfishness 187
(4) Imagination and Monopoly 195
(5) The Back-fire of Socialism 202
(6) More Imagination and More Monopoly 207
(7) Millionaires Who Invent People . . . 216
VII How Some Money Looks 228
VIII How the People Show Through 238
IX The Still Revolution 252
X Mr Carnegie as an Experiment Station for millionaires 256
XI On Being Too Big to Do Wrong 263
XII The Next Corner of the World 276
Epilogue 301
the book details : Download 7.1 MB