Individualism, a system of politics 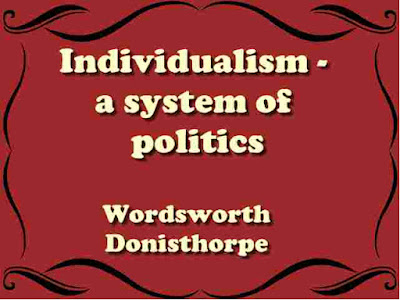 The range of subjects dealt with in the present volume is doubtless a wide one, but it will be found, I trust, that all have been treated consistently from what may be called the individualist standpoint. The merit of formulating this theory of government, and thus of laying the rough foundations upon which a sound art of Politics may be based, undoubtedly belongs to Mr Herbert Spencer, who has contributed more to the scientific study of society than any other thinker — not even excepting Auguste Comte or John Austin.
It is therefore with the greater regret that I find myself unable to accept either the principles or the conclusions set forth in Mr Spencer's most popular publication on the subject
The Man v. the State. Though this in no way lessens the great debt of gratitude which all seekers after truth in this field owe to him. And for myself, I take this opportunity of acknowledging it. One word as to the order of the following chapters. Had I followed my own inclination I should have placed them thus:— I, II, III, YIII, IX, XII, IV, X, V, VI, VII, XI, in which order I will briefly refer to them. But I was overruled by friendly criticism. It was urged that my readers would wish to know something of the practical bearing of  Individualism on everyday affairs before inquiring too closely into the philosophic basis of the theory.
Chapter I. deals with the nature, growth, and development of states or organised societies; Chapter IT aims at forecasting the final structure of the State for governmental purposes, and Chapter III seeks for the true scope of its activities in relation to the individual units of which it is composed, and the resulting limitation of the liberties of the citizen.
The reader who then passes at once to Chapter VIII will there find the doctrine of individualism carried to its logical extreme as philosophic anarchy; while the necessary qualifications of this extreme view are set forth in Chapter IX. The latter originally appeared in the Westminster Revieio (July 1886), and is but slightly altered; the principal addition being the pages showing the twofold origin of Justice.
This chapter also contains my reasons for dissenting from some of Mr Spencer's conclusions; and Chapter XTI carries the war against Absolutism into the domain occupied by Mr Auberon Herbert, his ablest general. In Chapter IV, returning to inductive individualism, I analyse the conception of Property, applying the definition reached to the solution of certain practical problems.
Chapter X deals with the modern school of land-law reformers, whose views seem to me to be pretty clearly expressed in a lecture by Mr C. A. Fyffe, afterwards endorsed by a cabinet minister who, though he has since passed out of public notice, well represented the neo-radical opinions of our day. Chapter V, by an inquiry into the true nature of Capital, lays the foundation of the system of labour capitalisation which is worked out in the two succeeding Chapters VI and VII. And Chapter XI treats of the only consistent system of politics which can be opposed to that of individualism, namely, socialism.
The doctrines of socialism are growing in popularity, not in this country only, but all over the civilised world; and they are in my opinion the chief danger in the way of social progress. The apostles of this delusive gospel are legion, and inasmuch as they disagree among themselves to such an extent that it is difficult to fasten any particular teaching upon them as a body, I have adopted my usual plan of singling out one of the clearest and best among their writers and treating his exposition to a searching examination.