Human nature and its remaking 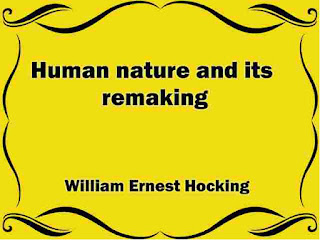 From the introduction:
Since books are no longer supposed, whether by author or public, to contain the final and finished truth, no book need to apologize for being unripe. One's hope is, not to close the discussion, but to open it. What I have here aimed to do is the work rather of the quarryman with his blasting powder than of the sculptor with his chisel.
Not that the quarry of human nature is a new one. But that we are only beginning to learn the technique of dealing with the larger masses.
Few of us, I dare say, is satisfied with the degree of clarity we have reached about the rights of the primitive impulses, — of the instincts of pugnacity, sex, acquisition, etc., — as compared with the claims of social orders such as we see dissolving before our eyes, or of super-social orders, of art and religion.
These and other agencies attempt to transform the original material of human nature; human nature resists the remaking process; the groping effort of mutual adjustment has continued throughout the length of history, has made the chief theme of history; we still seek the broader principles which govern the process, call it what you will, — the process of remaking, of educating, of civilizing, of converting or of saving the human being.
The quest for such principles is the object of this present essay.
No doubt, we have always lied to our authorities ready to spare us the trouble of search, ready to settle ex-cathedra what human nature is and ought to become. And presumably, we have always had a party of revolt against authority, convention, and the like, in the name of what is 'natural,' — a revolt which has commonly been as dogmatic and intuitional as the authority itself. But the revolt of today is no longer either impressionistic or sporadic. It is psychological, economic, political: — and it is general.
The explosive forces of self-assertion which have finally burst their bounds in the political life of Central Europe have their seat in a widespread spiritual rebellion, critical impatience of 'established' sentiments and respectabilities, a deliberate philosophic rejection not more of Hague Conventions than of other conventions, a drastic judgment of non-reality upon the pieties of Christendom.
This rebellion would hardly have become so widespread or so disastrous if it were wholly without ground. (It indicates that our moral idealisms like our metaphysicaHdealisms have been taking their task too complacently Our Western world has adhered to standards with which it has never supposed its practice to be in accord; but heaving a resigned sigh over the erring tendencies of human nature, it has offered to these standards that 'of course' variety of homage which is the beginning of mental and moral coma.
By labelling these standards 'ideals' has rendered them innocuous while maintaining the profession of deference: an 'ideal' has been taken as something which everybody is expected to honour and nobody is expected to attain. It is just these ideals that are now violently challenged, and the challenge is salutary. It is precisely the so-called Christian world which, having gone morally to sleep, is now put to a fight for life with the men who persist in reducing their standards to the level of common practice, in reaching their code of behaviour from below upward, not from above downward, in keeping their 'ideals' close to the earth or at least in discernible working connection with the earth.
Their creed we may name moral realism, and the craving for an ingredient of moral realism in our philosophy seems to be a justified hunger of the age.
The whole set of realistic upheavals, Nietzschean, neo-Machiavellian, Syndicalistic, Freudian, and others, crowd forward with doctrines about human nature and its destiny which at least have life in them. Whatever else they contain, unsound or sinister, they contain Thought: and this thought must be met on its own ground.
The next step, whether in social philosophy, or in education, or in ethics, requires an understanding between whatever valid elements moral realism may contain and the valid elements of the challenged tradition. We find our initial common ground with this realism by accepting, for the purposes of the argument, the picture of original human nature as a group of instincts.
With this starting point, the usual realistic assumption is that human life consists in trying to get what these instincts want. Mankind's persistent concern in food, adornment, property, mates, children, political activity, etc., is supposed to be explained by the fact that his instincts confer value on these objects.
By shaping our 'values,' instinct becomes the shaper of life. And the first and main business of the science of living would be to set up an authentic and proportionate list of the instincts proper to man. Then every social order, every moral or economic code, every standard of living would be judged by the satisfaction it could promise to the chorus of innate hunger and impulses thus revealed. This view is simple, attractive, — and profoundly untrue to experience.
The trouble is that no one can tell by identifying and naming an instinct what will satisfy it. Certainly, we cannot take the biological function of an instinct as a sufficient account of what that instinct means to a human being — as if hunger held the conscious purpose of building the body, or love were an aim to continue the species.
The word 'instinct' has no magic to annul the obvious truth that satisfaction is a state of mind, nor to evade the long labour of experience in determining what can satisfy a mind. Conscious life is engaged quite as much in trying to find out what it wants as in trying to get it. The truth is, instinct requires interpretation.
We can set up a usable measure of social justice and the like only if we can find something like a true interpretation of instinct, or of the will as a whole.
Download 8.4 MB