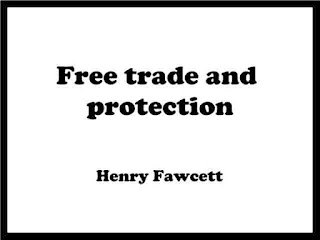 An inquiry into the causes which have retarded the general adoption of Free Trade since its introduction into England.
From introduction:
The extension of protection in Europe, the United States, and many of the English Colonies in recent years. — The expectations, formerly entertained in this country, that the example of England in adopting a free-trade policy would be followed by other nations, have not been realized. — Nothing is more likely to retard the cause of free trade than to under-rate the strength of the opposition to it, and to ignore the arguments of its opponents.
The adoption of free trade in England was hastened by the fact that protection was most strictly carried out with regard to agriculture, and consequently, its most obvious result was the rise in the price of food ; while, in other countries, protection is almost entirely confined to manufactured products.
The abolition of protection may cause much suffering and loss to those employed in the industries which have been brought into existence through protection. — This loss corresponds to that which is caused to workmen who possess special manual skill in any handicraft if the necessity for their labour is superseded by the invention of the machine.
The motives which have prompted the opposition to the introduction of free trade in America and other countries are analogous to those which have led workmen employed in certain trades to resist the introduction of machinery.
The adoption of protectionist principles in the Colonies has been encouraged by the opinion expressed by Mr Mill, that the imposition of a protective duty, with the view of promoting a new industry in a recently-settled country, may be justified as a temporary expedient.
Protection in the Colonies has also been promoted by the fact that the gold discoveries in Australia attracted thither large numbers of operatives and artisans from England, who, finding gold-digging to be less remunerative than they had anticipated, welcomed any proposal to establish, by the aid of protective duties, those industries to which they had been accustomed.
An injury is done to the cause of free trade if the industrial prosperity of England is attributed entirely to her adoption of a free trade policy, and the other causes of this prosperity, such as the development of our railway system and fiscal reform, are left out of account. For example, the habit of attributing our prosperity solely to free trade has, on the occurrence of a temporary check to this prosperity, led to a reaction in favour of reciprocity, or "fair trade." — A statement of the order in which the subject of the book will be treated.
Bounties on Exports and Protective Subsidies. Protection has been in recent times supported with the object of giving assistance to home industry and has been chiefly carried out by giving bounties on exports and imposing restraints on imports.
The system of encouraging exports and discouraging imports was a product of the mercantile system, and was originally adopted with the object of securing a "favourable balance of trade." — Protection is now chiefly carried out by imposing import duties; bounties on exports are, however, occasionally granted at the present time.
Formerly bounties on exports were as general in England as protective duties on imports. The effect of the bounties on the export, and restraints on the import, of corn which formerly prevailed in England.
the book details : Download 6.6 MB