Folklore as an historical science 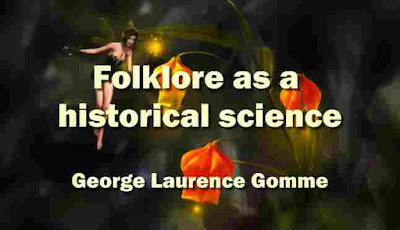 From the introduction:
If I have essayed to do in this book what should have been done by one of the masters of the science of folklore— Mr Frazer, Mr Lang, Mr Hartland, Mr Clodd, Sir John Rhys, and others— I hope it will not be put down to any feelings of self-sufficiency on my part. I have greatly dared because no one of them has accomplished, and I have so acted because I feel the necessity of some guidance in these matters, and more particularly at the present stage of inquiry into ^e early history of man.
I have thought I could give somewhat of that guidance because of my comprehension of its need, for the comprehension of a need is sometimes halfway towards supplying the need.
My profound belief in the value of folklore as perhaps the only means of discovering the earliest stages of the psychological, ^^' religious, social, and political history of modern man has also entered into my reason for the attempt. Many years ago I suggested the necessity for guidance, and I sketched out a few of the points involved {Folklore Journal^ ii. 285, 347 ; iii. 1-16) in what was afterwards called by a friendly critic a sort of grammar of folklore.
The science of folklore has advanced far since 1885 however, and not only new problems but new ranges of thought have gathered around it. Still,  the claims of folklore as a definite section of historical material remain not only unrecognised but unstated, and as long as this is so the lesser writers on folklore will go on working in wrong directions and producing much mischief, and the historian will judge of folklore by the criteria presented by these writers — will judge wrongly and will neglect folklore accordingly.
I hope this book may tend to correct this state of things to some extent. It is not easy to write on such a subject in a limited space, and it is difficult to avoid being somewhat severely technical at points. These demerits will, I am sure, be forgiven when considered by the light of the human interest involved. All studies of this kind must begin from the standpoint of a definite cultural area, and I have chosen our own country for the purpose of this inquiry.
This will make the illustrations more interesting to the English reader, but it must be borne in mind that the same process could be repeated for other areas if my estimate of the position is even tolerably accurate. For the purpose of this estimate, it was necessary, in the first place, to show how pure history was intimately related to folklore at many stages, and yet how this relationship had been ignored by both historians and folklorists.
The research for this purpose had necessarily to deal with much detail and to introduce fresh elements of research. There is thus produced a somewhat unequal treatment; for when illustrations have to be worked out at length because they appear for the first time, the mind is apt to wander from the main point at issue and to become lost in the subordinate issue arising from the working out of the Xlll in chosen illustration.
This, I fear, is inevitable folklore research, and I can only hope I have overcome some of the difficulties caused thereby in a fairly satisfactory manner. The next stage takes us to a consideration of materials and methods, in order to show the means and definitions which are necessary if folklore research is to be conducted on scientific lines.
Not only is it necessary to ascertain the proper position of each item of folklore in the culture area in which it is found, but it is also necessary to ascertain its scientific relationship to other items found in the same area, and I have protested against the too easy attempt to proceed upon the comparative method. Before we can compare we must be certain that we are comparing like quantities.
These chapters are preliminary. After this stage, we proceed to the principal issues and the first of these deals with the psychological conditions. It was only necessary to treat of this subject shortly because the illustrations of it do not need analysis. They are self-contained and supply their own evidence as to the place they occupy.