the accounts of eyewitnesses and participants 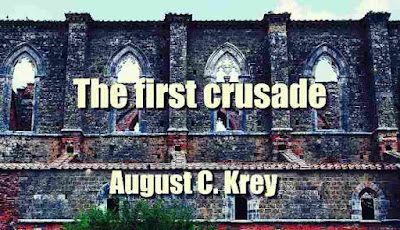 From preface:
When Henry Adams sought to triangulate the progress of modern civilization he fixed his historical transit at Mont St. Michel and Chartres in the days of the First Crusade and sighted from them across the centuries. No earlier place in the Middle Ages would have afforded a foundation of equal breadth in its description of society.
The spiritual character of the Crusade lent a halo to even the most commonplace details connected with it and thus gave to them literary immortality hitherto confined rather narrowly to matters of ecclesiastical interest.
The widespread enthusiasm for the movement and participation in it assured its commemoration not only in monuments of stone but in a variety of writings as well. The authors of these accounts were neither sophisticated nor highly trained in their art.
The picture of a society which they drew, though relatively complete, has stood forth with all the simple and stark realism of a charcoal sketch, full of feeling, action, and scenery, but lacking in the finish. The polish and finish have come with the later centuries. For those, however, who would understand that society even in its more finished form, a knowledge of the preliminary sketch is still essential. In these lack-o-Latin days students seeking to accomplish this find their path too much beset with linguistic obstacles. It is to ameliorate these difficulties that the present volume has been compiled.
The plan of this work will be found reminiscent of Archer's Crmade of Richard I and the Parallel Source Problems of Mediaeval History. The author gratefully acknowledges in- indebtedness to both. For assistance in the preparation of these translations, he is under great obligation to several of his former students.

Introduction i
Prologue 22
Chapter 1. The Summons 24
I. Conditions in Europe at the beginning of the Crusade
2. Urban's plea for a Crusade 3. The immediate response. ,
4. Urban's instructions to assembling Crusaders,
Chapter II. The March to Constantinople 44
I. The Departure
2. The March of the Peasants
3. The Main Body.
Chapter III. Alexius and the Crusaders 69
I. Alexius and the Peasants. The fate of the Peasants' Crusade
2. The Emperor's treatment of Hugh
3. Godfrey at Constantinople 4. Alexius and the minor leaders
5. Bohemund and the Emperor
6. Raymond and the Emperor
7. Robert  Normandy and Stephen at the Emperor's Court
8. Siege and capture of Nicaea 9. Alexius
10. The views of Alexius on his relations with the Crusaders.
Chapter IV. From Nicaea to Antioch 112
1. Battle of Dorylaeum
2. Hardships of the march through Asia Minor
3. Baldwin and Tancred depart from the main army
4. The march through Armenia
5. Beginning of the siege of Antioch
6. Summary of the march to Antioch and the beginning of the siege
7. The foraging expedition of Bohemund and Robert of Flanders
8. Sufferings in camp before Antioch
9. Call for reinforcements
10. The erection of a fortress. Fights with the Turks
11. The capture of Antioch
12. Summary of the siege of Antioch. ^
Download 15.8 MB