Family names and their story 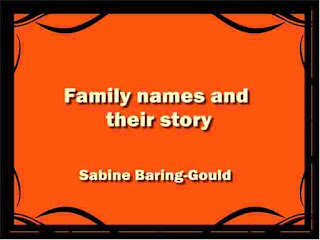 Since then there have been various works on the subject, some good, some bad, some instructive, others misleading; there have been treatises on Irish and Scottish, and on particular county names. Mr R. Ferguson, in his " English Surnames and their Place in the Teutonic Family," 1858, and "Surnames as a Science," 1883.
The Teutonic Name-System applied to Family Names in France, England, and Germany," 1864, went too far in deriving most surnames from Teutonic roots, led thereto by Forstemann's "Alt- Deutsches Namenbuch " (Nordhausen, 1856), a vast work that has been condensed by Heintze in " Die Deutschen Familiennamen " (Halle, I882).  Mr Bardsley, in his " English Surnames," dealt almost wholly with those found in the Hundred Rolls, 1273, and other documents of the thirteenth and fourteenth centuries. Dr Barber, in " British Family Names " (London, 1894), gives perhaps excessive preeminence to Scandinavian and Flemish names, to such an extent that he derives the family name Bevan from the Flemish Bevenot, whereas it stands for Ap Evan. Carter, according to him, comes from the Norse Kotter, and Child from skjoldr, a shield. Shepherd, he cannot deduce from a shepherd but derives it from a place called Chebbard. The book has, therefore, to be used with caution. "
Ludus Patronymicus; or, The Etymology of Curious Surnames," by Richard Stephen Charnock, 1868, as the author is a scholar, maybe consulted with advantage. " Homes of Family Names in Great Britain," by H. Bing- ham Guppy, M.B., 1890, is a scholarly work, the result of much research, and evincing a wide knowledge of names, if not of their meanings.
Its great value is in the location of family names. There are many other books whose titles and the names of their authors I refrain from giving, as they are often misleading the blind leading the blind into pitfalls. In treading the mazes of English nomenclature, one is surrounded by such pitfalls; it is like the road to Plessis Castle, according to Scott in " Quentin Durward ": " Every yard of this ground is rendered dangerous by snares and traps and caltrops, and pitfalls deep enough to bury you in forever." One has to walk warily.
It is noticeable enough where others have slipped and fallen in or been caught, and I cannot flatter myself that I have wholly escaped. But it must be borne in mind that some names may have distinct derivations, though identical in sound and spelling. For instance, Tozer signifies one who dresses cloth in a fulling-mill with teazles, to bring up the nap. But at the Revocation of the Edict of Nantes, a family of Thorzeau, Huguenots, settled in Plymouth, let fall the rout of their name, and accommodated it to Tozer.
The Dacres no doubt in some cases derive from a crusading ancestor who won distinction at Acre, but in most instances take their name from a village near Penrith so-called; and a Ranulph de Dacre, co. Cumberland, who figures in the " Placita quo Waranto," in the reign of Edward I., certainly was designated after this village.
What is the true origin of the surname Kaye? Sir Kay was one of the Knights of the Round Table, and King Arthur's Seneschal; and the romances of the Middle Ages furnished names adopted by people in England and in France. But John del Kai, Sheriff of London in 1207, obviously took his name from the Quay, near which he lived. And Kay is a common pronunciation of Key, and a man who had a key for his shop sign may have by this means acquired his name. How can we decide whether the family of Kewe derives from the parish of that name or from a Cook ?
The same individual is described in the Parliamentary Writs for 1301 and 1302 as William le Keu and William Cocus. Some names are supposed to be derived from seasons, as Noel, Pask, Lammas ; it may be so in some cases, but Noel may come from Noailles, or be a form of Nigel ; and when one finds the same man registered in 1273 as Richard Lammesse and Richard de Lammesse, and when one knows that there is a parish of Lammas in Norfolk, one is disposed to doubt the temporal derivation of some of these names. But a good many such season names were given to foundlings.
A Leach is unquestionably a physician, and the horrible creature that was formerly supplied to suck one's blood was so named because it served as a useful doctor in cases of inflammation. But the surname Blackleach does not ix PREFACE derive from one of these. Such an entry in the Hundred Rolls for 1273 as that of William le Leche undoubtedly describes a physician. But Henry del Lache, in 1397, indicates that Henry lived by a Lache, or lake, or pool; and Blackleach means the man living at or by Blackpool. "
What variety of herbs soever are shuffled together in the dish," says Montaigne, " yet the whole mass is swallowed up in one name of a salad. In like manner, under the consideration  of names, I will make a hodge-podge of differing articles."
the book details : Download 19 MB