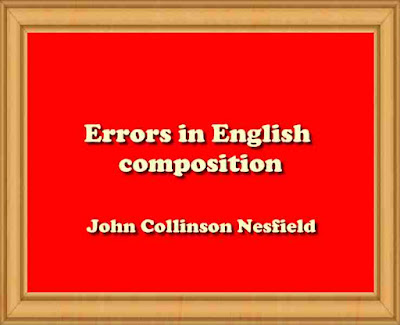 From preface:
This book is called " Errors in English Composition," because it chiefly consists of examples in which some error in Grammar, Construction, or Order occurs. The sentences, which the student is asked to " correct, improve, or justify," have been taken both from literature and from journalism, mainly, however, from the latter, and mainly from very recent journalism.
They are likely, therefore, to show the kinds of inaccuracies which (if my views on such matters are sound) are most prevalent at the present day, and against which a writer who desires to be accurate as most need to be on his guard. Certain books, or rather certain portions of books, having the same object in view have been published already, viz. the section on " Solecisms " in Campbell's Philosophy of Rhetoric; the long chapter on "Composition" in Breen's Modern English Literature,
Its Blemishes and Defects; and Part II., dealing with "Accidence," together with Part III., on " Syntax," in Hodgson's Errors in the Use of English, — the most complete book of the three. In each of these books, the solution of every sentence that is quoted for correction is given immediately under the sentence itself.
My own plan is different. I have given the solutions at the end of the book quite apart from the sentences themselves (just as "Answers to Examples" are given at the end of a book on Arithmetic), so that the student may have the profitable labour of examining and, if necessary, correcting each sentence himself, before he refers to the answer for verification. Most students, even those who have made some progress in original composition, find it necessary to revise the first draft of an essay before making a fair copy.
Practice in working out the examples given in this book will, it is hoped, be an aid to such revision, by showing the student what kinds of mistakes he is likely to make, and in what way or ways such mistakes can be put right As the book contains a key to all the examples that it contains, it can be used privately by anyone who desires to study its contents without the help of a teacher. If it should be used in class, I advise that the students be required to give their answers orally and at sight, so that greater facility may be acquired in the detection and avoidance of error, and time may not be wasted either in preparation or in writing.
At the head of each set of examples, I have given a few notes explaining the principles involved. There are some points in English Grammar and Construction about which no final settlement equally satisfactory to all has yet been reached. On all such points, I have given my own view and the reasons for it. But no one, as I need scarcely add, is obliged to endorse what I say, if he sees reason to dissent, and can substitute something which he considers better.
Part I. Sentences to be corrected or justified.- Part II. Solutions of examples in Part I
the book details : Download 17.3 MB