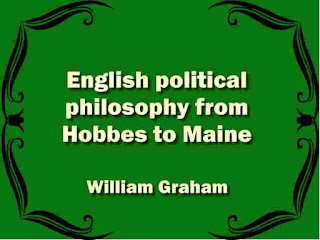 From Introduction:
The design of the following work is twofold — first, to give a connected account within a moderate compass of the political theories of the greater English political thinkers who have most influenced practice from the days of Hobbes, the first great fountain of original ideas; secondly, by a reasoned criticism, to distinguish what is permanently true from what is doubtful or erroneous, to disengage the former, and, as far as may be, develop it further, with the hope that finally from the exposition and criticism together something like an Introduction to Political Science might result, resting on authority and reason combined.
It is conceived that, by the critical application both of the old Deductive and the new Historical Methods of reasoning to the successive systems of the leading English political thinkers, we might arrive, if not at a more comprehensive system, which it is not my object to attempt to construct, yet at a body of principles, a set of reasoned conclusions on the more important and fundamental and recurrent topics that might be useful to all who take a rational interest in politics and political questions.
The book is addressed partly to the ordinary students of political philosophy (who have hitherto been largely nurtured on the works of Maine and the harder and scantier fare of Bentham and Austin); but it is also addressed to serious students of maturer years, such as those who have honoured me by reading my previous work on Socialism, — to all, in fact, who desire to have a grasp of political principles perhaps better reasons for the articles of their political creed.
The latter class I believe to be an increasing one, as it is very desirable it should be in days when political power is so widely distributed without the political knowledge that should accompany it; knowledge which can only be supplied without adulteration to the many by the educated and more fortunate classes; and which it is at once the duty and interest of the latter that they, and not demagogues, should endeavour to supply.
The political thinkers with whose systems I deal are Hobbes, Locke, Burke, Bentham, J. S. Mill, and the late Sir Henry Maine, because, if not all in the first rank, they have been the most influential in the sphere of practice.
They have all had influence — the first three vast and almost incalculable influences. Like the Hebrew prophets, they have influenced their age, but, more than the prophets, they have furnished the thoughts which governed the minds of the apparent governors, whether kings or statesmen.
They have been in a certain sense the true kings. The ideas of Hobbes ruled for years in England, and are even yet a power; while Locke's book on Civil Government furnished the Whig creed for the whole century before the French Revolution.
Still more, the ideas of Hobbes and Locke combined contain Rousseau's ideas, whose doctrine of the sovereign people, so explosive at the Revolution, and so powerful now, is but a blend of Hobbes' idea of the sovereign's omnipotent attributes joined toM Locke's idea of the people as the source of political power.
the book details : Download 11.8 MB