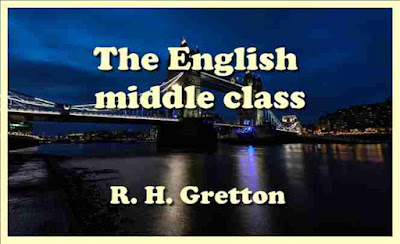 Excerpt:
There are few subjects upon which it would be less justifiable to enter without an attempt at definition than the subject of the English Middle Class. It need hardly be added that there are few in which definition is more difficult. The term implies social distinctions, and these are of all distinctions the least permanent. It has, moreover, an inherent vagueness; the very name "Middle Class " suggests a stratum of society which, though obviously in existence, and calling for a descriptive label, was so lacking in marked characteristics or qualities that it could only be described as lying be- tween two other classes.
In one sense this label has been singularly successful. It has served equally well whether the other two classes have been regarded as most characteristically lords of the soil and labouring men, or great nobles and rabble, or wealthy and poor, or cultured and uneducated, or capitalists and artisans. At different periods of our history these differing oppositions have served their turn; and at each period the name of "Middle Class " has carried a sufficient content for all practical purposes.
Nothing could display more clearly than this the lack of exactitude in the name. To be equal in its place with such varying kinds of social classification, a term must be essentially a negative one; its inclusions can be nothing but the exclusions of the two other terms.
The fact that the other classifications vary in description implies that at different periods, or in relation to different aspects of thought, the meaning they carried was inapplicable or insufficient. The fact that this one title is unvarying implies that it has no inseparable meaning, but only a meaning relative to the particular connection in which it is used. It follows that it would be hopeless to attempt any definition of our subject on the lines of these social distinctions.
The definition would have to be re-made with every century — at some periods with every decade. Another reason for the difficulty of definition is that the word ** middle" must, in anything as mobile as human society, mean also "transitional." A middle class must, at both ends of its scale, be merging into the neighbouring class; and, since the merging is at the one end intentional, and at the other a confession of failure, it is a delicate matter to draw the line at either end. Even though this might be done pass- ably well at any given moment in history, we should again be confronted with the need for perpetually re-making the definition.
The rank of life which could be labelled " Middle-Class " in the fourteenth century would be found to contain, in the sixteenth, large numbers of people whom there would be no valid reason to exclude from the ranks of nobles or lords of the land,
The difficulty increases so much with later periods that it might be said (and indeed is generally held) to be impossible at the present moment to delimit any section of the community in an effectual way as middle class. Some might even go a step further and say that such delimitation is not only next door to impossible, but is also unnecessary. So long as the label conveys, in any particular connection, a sufficient meaning, so long as we know practically what we have in mind when we think of the middle class of the Elizabethan dramatists, of Walpole's financial out-look, of the Chartist agitation, or of Matthew Arnold's irony, what need is there for attempting any exact characterization of the people included under that label at various periods?
This argument, however, is but an expression in different words of that deliberate vagueness in the phrase ''Middle Class." It amounts only to say that this class is sufficiently defined by a clear definition of the two other classes; and that if the attitude, the pursuits, and the social condition of those two classes are made plain, those of the Middle Class can be deduced or conjectured.
They will depend on the approximation or inclination of the Middle Class to one side or the other. It should hardly be necessary to labour the point that this is a position neither scientific in spirit nor satisfactory in result.
The effect of it is that, in the normal writing of history, the Middle Class makes sudden and unrelated appearances in the narrative. It crops up here and there, when any political or social event occurs which obviously has its roots neither in the aristocratic theory of government nor in popular pressure. It crops up also when considerations of trade seem for the moment to dominate the national policy.
It is hazily cre- dited with the establishment and progress of local government. Since it is thus only observed at crucial moments, and in operations as a rule successful, it comes to be regarded as a solid, well-conditioned body, free to a large extent from the prejudices and conflicts of the more distinctly characterized classes, intervening with weight and judgement at the right time, and for the most part minding its own business.
Now such a view as this can only be confirmed or corrected by some continuous observation of the class to which it applies. There might, indeed, be continuous ob- servation without any precise definition. It would be quite possible to proceed on the admission that at any given period we can speak of a Middle Class with a general, if shadowy, agreement as to the people indicated. But to reach a scientific, as well as a satisfactory, result, it would be better to be able to proceed on some hypothesis as to the mental standpoint and the practical philosophy of a Middle Class.
the book details :  Download 10.2 MB