Darwin and Hegel, with other philosophical studies 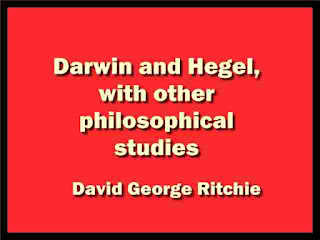 From introduction:
The papers collected in this volume have pre- viously appeared in Mind, The Proceedings of the Aristoielian Society, The Philosophical Review, The Economic Review, The Political Science Quarterly, The Annals of the American Academy of Political and Social Science, and The International Journal of Ethics ; and I have to thank the respective Editors for their kindness and courtesy in permitting repub- lication. The " Notes " at the end of the first and third essays have not been printed before.
Corrections and alterations of varying importance have been made ; but I have not attempted to give these essays, written at different times, an appearance of greater unity than belongs to them from the fact that the diverse subjects are looked at from a common point of view.
I have put in the title of the volume the title of the second essay, because it indicates with sufficient emphasis what that point of view is ; it expresses my endeavour to reconcile a qualified acceptance of the general principles of that idealist philosophy which is based on Kantian criticism (but which, at the same time, carries us back to Plato and Aristotle) with a full recognition of the revolutionary change in our intellectual universe which is due to the historical method of studying ideas and institutions, and, in particular, to the influence of the biological theory of natural selection. "Idealism" and "Materialism" are commonly spoken of as antagonistic types of philosophy ; and, In a sense, they are, I have tried to show that one form of idealism is quite compatible with that materialistic monism which is now-a-days the work- ing hypothesis of every scientific explorer in every department, whatever other beliefs or denials he may, more or less explicitly and more or less consis- tently, superadd.
Materialistic monism. It seems to me, only becomes false when put forward as a com- plete philosophy of the universe, because it leaves out of sight the conditions of human knowledge, which the special sciences ' may conveniently dis- regard, but which a candid philosophy cannot ignore. It is too probable that my Eirenicon, like other efforts at peacemaking, may only result In provoking a twofold hostility, and that "Darwinians" and " Hegelians " will both look on me as a heretic. But I cannot, as yet, see any other way out of a hopeless controversy than that towards which I 1 Including, perhaps, even Psychology, as that is commonly understood.
Contents:
Origin and validity.--Darwin and Hegel.--What is reality?--On Platos̓ Phædo.--What are economic laws?--Lockes̓ theory of property.--Contributions to the history of the social contract theory.--On the conception of sovereignty.--The rights of minorities
the book details :
Download 6 MB