Concentration and the laws of mental efficiency 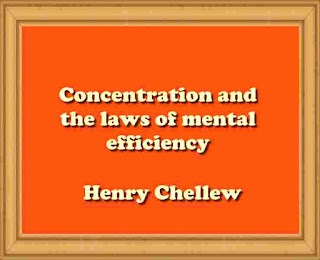 CONCENTRATED CONCENTRATION
This book is dedicated to the man who wishes to think for himself, who desires to stand alone and clothe his thought inappropriate language. Too many people are vendors of second-hand thinking, and the consequent lack of originality is the reason why the mind of the mob so often submerges the mind of the man who strives for an expression of his individuality and personality; thus originality and initiative become stifled.
We are indebted to the late Prof Huxley for the best definition of a trained mind. “ That man, I think, has had a liberal education,” he says, “ who has been so trained in youth that his body is the ready servant of his will and does with ease and plea¬ sure all the work that as a mechanism it is capable of; whose intellect is a clear, cold, logic engine, with all its parts of equal strength and in smooth working order—ready, like a steam- engine, to be turned to any kind of work, and spin the gossamers as well as forge the anchors of the mind; whose mind is stored with knowledge of the great and fundamental truths of Nature, and of the laws of her operations ; one who, no stunted ascetic, is full of life and fire, but whose passions are trained to come to heel by a vigor¬ ous will, the servant of a tender conscience ; who has learned to love all
To get the best out of this book do not read it straight through. It is a book on Concentration, and it is concentrated. It contains the essence of many books. Every sentence is full of thought and meaning. Here you have no words with purport, but much tuition in little space. If you take one section each day and revise for ten days afterwards you will get good results from the study.
To do otherwise is inadvisable.' The book can be read in an hour, studied in a week, absorbed in a month, but it will take a year to master it. It is printed as it should be read. Each paragraph is divided from the next by a larger than usual space.

Introduction -
Knowledge of Self
Some Causes of Distraction
Errors in Diet
What Concentration is -
Thought Power
Habit Formation
Memory Training
Inattention and Abstraction
The Law of Intensity - The Law of Continuity
Persistence
The Law of Vibration
The Law of Attraction
The Power to Will
The Independent Mind
Cure Mind-wandering
How to Increase Attention
-How to Gain Poise
The Cure of Worry
The Cure of Hesitancy
Nerve Control through Breath Control -
Index
The book details : Download 24.6 MB